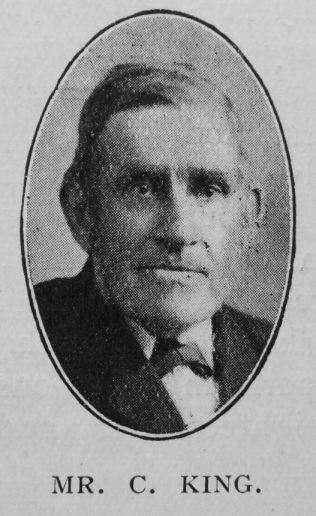 Transcription of obituary published in the Primitive Methodist Magazine by E.M.

The King family is one of the oldest in the Reading Circuit. The brothers Charles and William were the chief founders of the Reading Oxford Road Church. They began by holding services in a private house. Mr. King was the society steward and class leader, and assisted by his son he energetically, from year to year, took the lead in sustaining the work, raising funds for expenses and reduction of debt when the church was built.

During many changes our brother steadily maintained his loyalty and went on with the work till September of last year, when he removed to Mortimer. After this his strength gradually declined and his life on earth ended June 14th, 1912, at the age of seventy-seven. His remains were laid to rest in our own ground adjoining the Mortimer chapel. Mr. Collier, the head of the firm he had served from a boy, testified to the genuineness of his character, and his son and widow and many others have the memory of one who lived a blameless and useful life.

Charles was born in late 1837 at Mortimer, Berkshire, to parents Charles, a brickmaker, and Elizabeth.

He married Charlotte Henwood (abt1835-1917) in the spring of 1858 at Reading Berkshire. Census returns identify one child.