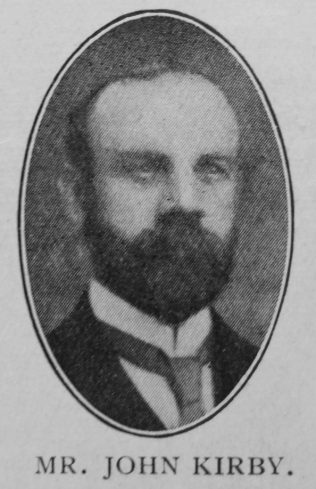 Transcription of obituary published in the Primitive Methodist Magazine by G.A.

“In the midst of life we are in death.”

All the members of the Glebe Society, South Shields Circuit, have been forcibly reminded of this truth. On Sunday, Sept. 29th, John Kirby was present at both services, attended to his duties as one of the stewards with his accustomed zest, and in little more than twenty-four hours he had joined the Church triumphant. He was laid to rest in Harton Cemetery amid every token of respect on Oct. 4th.

He was born at North Creek in Norfolk in 1853, and was a member of the Temple Church, Great Yarmouth up to the time of his removal to the North thirty-five years ago. For the last twenty-three years he has been closely associated with the Glebe Society, and was never happier than when doing something to advance its interests. He was a chapel steward and trust secretary, and took a real delight in his duties.

His work-mates, amongst whom he was greatly respected, would often hear him speak in praise of his Church, and receive invitations to her services. He was a faithful friend and a sincere Christian.

John was born on 15 January 1853 at North Creek, Norfolk, to parents Charles Kirby, who worked the land (1861), and Hannah Frary. He was baptised on 3 April at North Creek.