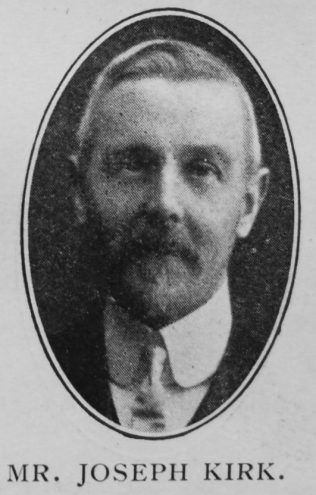 Transcription of obituary published in the Primitive Methodist Magazine by E.B.S.

Born at Castleside, near Consett, in 1858, Mr. Joseph Kirk entered the employ of the Consett Iron Company at the age of 11, and was for 41 years one of their most trusted and efficient servants. Employed in the “Cost” department, hundreds of thousands of pounds passed through his hands, but never was he found to be a penny in error.

Mr. Kirk was one of Nature’s gentlemen. He was the essence of courtesy and never known to break his word.

Our brother was associated practically all his life with our Blackhill Church. Quiet, unobtrusive, methodical, assiduous, he was a pillar of strength, and his influence was great. Many years superintendent of the Sunday School, and treasurer of the Trust, at the time of his death he was the Senior Circuit Steward.

Only a few days before he passed away the Connexional Editor had requested a photo and sketch of him to appear amongst the Circuit Chancellors in the Aldersgate Magazine, and he well deserved that recognition.

He was also the treasurer of the Centenary Fund, and had the gratification of knowing the Circuit liabilities were fully met within the Centenary period.

The end came with tragic suddenness. After five days’ of brave struggle, and intense suffering, borne without a murmur, he passed from us into the life eternal.

His funeral was a large one, testifying to the wide esteem in which he was held. Amongst the ministers taking part in the service were Revs. E. Phillipson (representing the District Committee), T.J. Watson, J.S. Nightingale, J. Rutherford, and E.B. Storr. The following epitaph was suggested for his tombstone:— “Here lies the body of one who lived through sunny days in unstained purity, and walked through the shadows with unflinching courage, and now rests in God.”

Joseph was born in 1858 at Castleside, nr. Consett, Co. Durham, to parents William and Ann.

He married Martha Heel (1858-1919) on 18 May 1879 at Newcastle upon Tyne, Northumberland. Census returns identify five of six children.