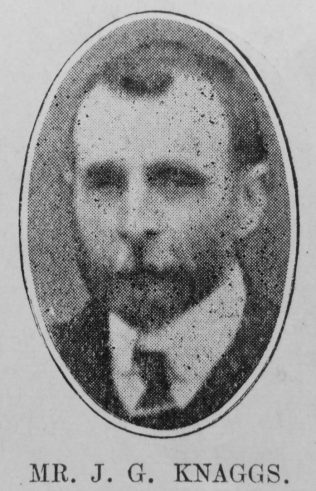 Transcription of Obituary published in the Primitive Methodist Magazine by R. Heppenstall

MR. JOHN GEORGE KNAGGS, who passed away in his forty-ninth year, has been connected with Primitive Methodism in Middlesbrough from his earliest years. The name of Knaggs goes back nearly forty years in connection with the Gilkes Street Church. Our departed brother was a Sunday School scholar in the Richmond Street Church, but he became a member of Society at Gilkes Street during the ministry of Rev. H.B, Kendall B.A.

He became an active worker in the Sunday School and treasurer. He was also a trustee for three of our Middlesbrough churches. A graceful and winning personality, he had a tender heart and a ready helping hand for those in suffering and need, and was particularly kind and thoughtful to the aged.

As a Primitive Methodist he was most loyal and enthusiastic. He loved the church and he had enjoyed very close fellowship with many ministers and laymen of the Darlington and Stockton District. His long illness was patiently borne. The largely attended funeral service was held in the Gilkes Street Church, conducted by Rev. R. Heppenstall, and the following took part:—Revs. R. Hind, J.G. Bowran, P. Peacock, F. Winterburn.

John worked as an accountant.

He married Annie Elizabeth Ayre (1860-1938) in early 1882 at Middlesbrough, Yorkshire. Annie was adopted into the Bowman family by the time of the 1871 census. Census returns identify three children.