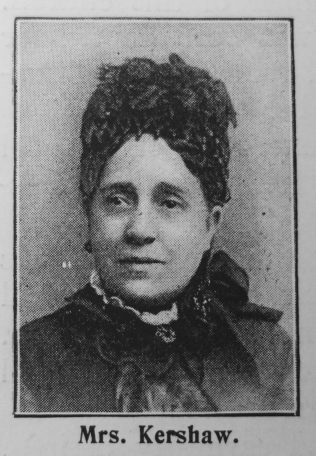 Transcription of Obituary In the Primitive Methodist Magazine by Enoch Bocock

The subject of this brief memoir, was born at Keighley, in Yorkshire, on August 9th, 1836.

Her parents were Robert and Mary Kaye. Robert Kaye was a minister of our own church, and was stationed at the afore-mentioned town. That she secured the training which such a home should ensure is evident from the character of her later life. Sarah Ann Kershaw was the second child and only daughter of a family of four children. In those earlier days at home she would have a thorough acquaintance with the limitations, the joys, and sorrows of a life lived in the home of a Primitive Methodist minister. Those were the days when our church was having its foundations laid broad and deep, though with considerable cost to its builders. Rev. Robert Kaye died whilst stationed at Stockport at the age of fifty-nine years. His ministry was spent chiefly in the Liverpool and Manchester districts, and he served the church valiantly. The girlhood and young womanhood of Mary Ann Kaye was spent at home, and two years after her father’s decease she married the Rev. Edward Kershaw, also a Primitive Methodist minister, who had just left Ramsey circuit, I.O.M. Their first circuit was Moss Lane, Manchester, and subsequently they travelled in Hollinwood, Darwen, Castletown, Preston, Ramsey, Lymm, Northwich, Helmshore, Downham Market in Norfolk, Hadleigh in Suffolk, Radstock and Grassington, where Mr. Kegshaw sought superannuation. Mr. and Mrs. Kershaw received the general goodwill and hearty co-operation of the members on their stations, and this is shown by second visits to the scenes of former labours. Mrs. Kershaw entered heartily into the work of her husband, though the circumstances, owing sometimes to excessive chapel debts, were most arduous. Our church has attained, or is attaining rapidly, a position of ease with respect, to its chapel and school trusts, but some of the most difficult, and in many respects some of the most self-denying, work ever done in our history was that effected between 1860 and 1885. Mrs. Kershaw was a help-meet in every circumstance. She was always forward in those enterprises which had for their aim the reduction of trust debts, and did not spare herself in the general work of the church. Many inspiring biographies have been written upon the lives of Methodist ministers, but who will do justice to the one who if she has not always been like her husband, “an angel of the church,” has proved to be what is sometimes more difficult, “an angel of the house ” under most difficult circumstances.

In 1891, her husband having sought superannuation, she with him went to live at Earlstown. In the year 1894 Mr. Kershaw died, and thus closed an earthly union which had been productive of much happiness and peace. After her husband’s death our deceased sister did not appear to enjoy life as formerly. The loss of her partner brought sadness. Her daughter, son and son-law did all possible to make her remaining years comfortable, but during the last three years her health rapidly declined. During the last year she was quite unable, much to her sorrow, to attend public worship. Infirmity and disease increased; there were bronchial troubles and a weak heart, which made life uncertain. I visited her a short time before her death and found her possessed of a strong Christian hope. Death came at 5.30 on Wednesday evening, November 7th. Two hours of unconsciousness preceded death. Her last words were heard at 3 o’clock in the afternoon. Her last prayer was like the one addressed to Jesus by a Phoenician woman, “Lord help me,” and the last words uttered suggested that happy ones were awaiting her. The last words were these: “I am coming.” Her life was gentle and fruitful in good deeds.

Note: her mother was Betsey Kaye, not Mary as stated in the article.