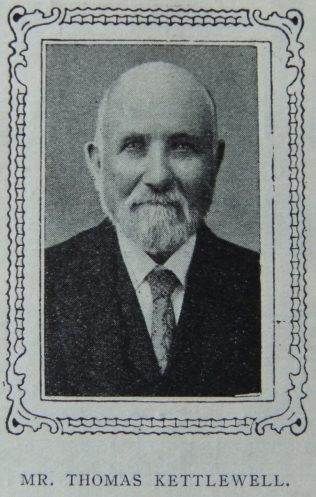 Carlisle Terrace Church, Goole, is fortunate in possessing several veteran workers who have more than retained, with the passing of the years, their devotion to Christ and the Church. Conspicuous among these is Thomas Kettlewell. Converted on the Louth Circuit when fourteen years of age, “Thomas”, as he is affectionately called, came to live in Goole at the age of seventeen, and at once joined the church and began to preach. His name now heads the list of local preachers, and in his knowledge of the scriptures, the freshness of his thought and the cheerfulness of his faith he well maintains the dignity and power of the pulpit. He was appointed Assistant Class Leader when twenty-one years of age, and Leader shortly afterwards, when the class was divided. Except for an interval of eighteen months – when he went to live in Wakefield – Thomas Kettlewell has been a Leader for thirty-five years. His class meets on Sunday mornings at 9.30.

It is good to hear him addressing the young men and women in the Sunday Afternoon Bible Class and exhorting them to read Henry Drummond and George MacDonald and above all to have a high ideal and study the life of Jesus of Nazareth.

Thomas Kettlewell is a working man and always on night duty, yet he finds time for reading and for prayer. For nearly twenty years he was Trust Secretary for Carlisle Terrace, and gave unstinted service to the church during a long period of struggle with debt. The Circuit has honoured him by making him one of its Stewards, and by electing him on two occasions to represent it at the District Synod.

Thomas was a railway goods guard.