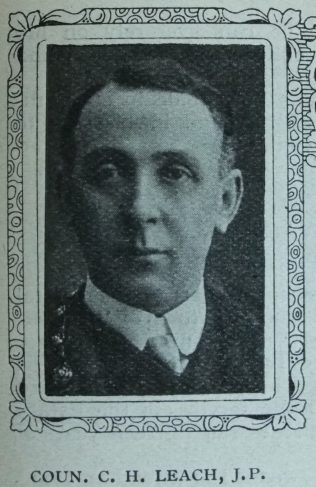 Coun. C.H. Leach has been a Primitive Methodist Local Preacher for twenty-three years. Possessed of a good voice, a fluent and vivacious utterance and a well-stored mind, his ministrations have been both popular and profitable. He has occupied the pulpits of most, if not all, of the Free Churches, not excepting the Unitarian, and frequently has to refuse invitations to preach away from home as he prefers to give uninterrupted attention to the Greenbank Sunday School, of which he is superintendent. Though just in the prime of life he has lived with such intelligence and energy that honours have been showered upon him. He is a barrister-at-law, holds the position of clerk to the Darlington Poor Law Union and Darlington and Croft Rural District Councils, and is Superintendent Registrar. He is a past president of the National Poor Law Officers’ Association, and was a member of the late Darlington School Board. From 1904-5 he was honoured in wearing the mayoral chain, and during the year actively promoted a hospital bazaar which raised £8,300. To-day he is a member of the Durham County Council and the Darlington Town Council, a governor of the Darlington Grammar School, and has recently been made a Justice of the peace. His literary work includes the joint authorship of “The Law Relating to Vaccination” and “Contracts of Local Authorities,” whilst his legal Press work is highly valued. For many years he has been an insistent temperance advocate and in politics is an ardent Liberal. Primitive Methodism has no more loyal son, and not the least that can be said of him is that he has great influence in the town where he is known the best. Needless to add he believes in the mission of the local preacher and wisely magnifies his office.

Charles was born in 1861 at Rochdale, Lancashire, to parents Alfred and Elizabeth. Alfred was assistant clerk to the Guardians at the time of 1861 census.

By the time of his second marriage, Charles had become an Alderman.