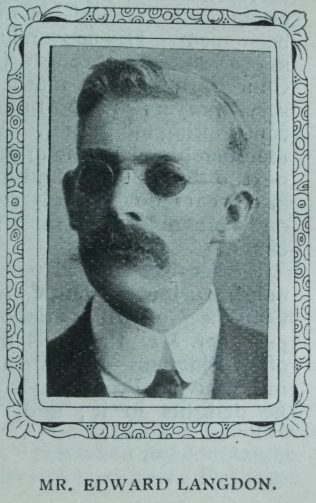 On the Somersetshire coast of the Bristol Channel lies the little town of Watchet. In this town, nearly forty years ago, Mr. Edward Langdon was born. His parents were Anglicans, and young Edward regularly attended the services of the Established Church until he was thirteen years of age.

At this time he was led to attend an evangelistic service held in the Bible Christian Chapel near his home, and this resulted in the boy’s conversion, the issues of which forcibly illustrate the wisdom of early decision for Christ.

At the age of nineteen he commenced the work of a local preacher, and for the period of twenty years he has proclaimed the Gospel of the Cross with acceptance and success.

For three years he laboured in connection with the Rev. J. Odell’s Evangelists’ Home. Then he served Castleford, Brigg, and Grimsby Third Circuits as H.L.P., coming in that capacity to Pontypool Circuit seven years ago. That the Circuit retained his services as H.L.P. for four years evidences its appreciation of his worth and work. The progress of the station justifying the calling out of a second minister, Mr. Langdon settled down to a business career, and without diminution of interest and devotion, has proved himself a worthy official, an excellent Sunday school worker, and one of the most useful local preachers. From the “plan” making standpoint he is an ideal local preacher. He delights in his work. He attends to preparation, carefully thinking out the substance of his discourses. The neglect of an appointment by him seems inconceivable. He willingly consents to fill up “breaches” when requested and when able to do so. As a local preacher he is characterised by fervid evangelism and intense enthusiasm. Honours are coming to him and he is worthy of them. He is representative on several inter-denominational bodies, was president of the Pontypool and District C.E. Union for 1906, and for two years has been the secretary of the Pontypool Centre of the Eastern Valleys Free Church Council. May he have increasing joy in his work.

Edward was born in 1865 at Watchet, Somerset, to parents John and Charlotte. John was a sawyer.

Edward was baptised on 27 August 1865 at St Decumans, Somerset.

Edward trained as a wood turner before becoming an evangelist. After settling in Pontypool he worked in the grocery retail trade.

Edward married Susannah Jones (abt1878-1950) in late 1898 in the Oswestry Registration District. Susannah was born at Chirk, Denbighshire. She married Herbert W Gadsden in 1940. Census returns identify one child.

Edward died in the spring of 1936 at Pontypool, Monmouthshire.