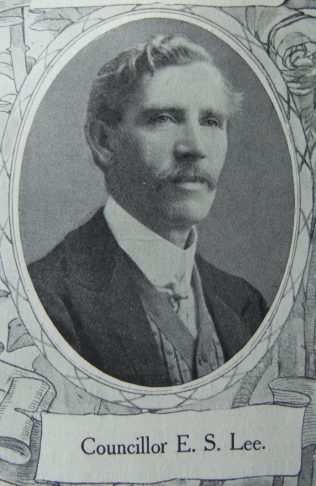 Councillor E.S. Lee is the Senior Steward of the Hexham Circuit. His father, a native of Edinburgh, was one of the earliest members there, and for many years the choirmaster. His mother belonged to Winlaton-on-Tyne, and was a Primitive Methodist from childhood. Born at Elswick, Newcastle-upon-Tyne in 1859, our friend was the secretary of the Trust, the Sunday School, and the Band of Hope while but a youth. Removing to Hexham, he established a successful business, retiring therefrom ten years ago. He is a member of the Urban Council, a Guardian of the Poor, and a Governor of the Grammar School. He is District Orphanage treasurer. A local preacher, he has been twice a delegate to Conference. His wife is the younger daughter of the late William Paxton, of Blaydon-on-Tyne, a gentleman of honoured memory. Their home, “North Ashfield,” is justly famed for its hospitalities.

Edward was born in 1859 at Newcastle upon Tyne, Northumberland to parents William Slaid Lee and Margaret. William worked as a bran finisher.

Edward retired from his business as a house furnisher in 1901. He served as Chairman of the Urban District Council and as a J.P. He also did splendid work in connection with the Prudhoe Hall Colony for the treatment of the mentally infirm.

Edward married Mary Jane Paxton (b1859) in the spring of 1885 at Blaydon on Tyne. They had two children who died in infancy.