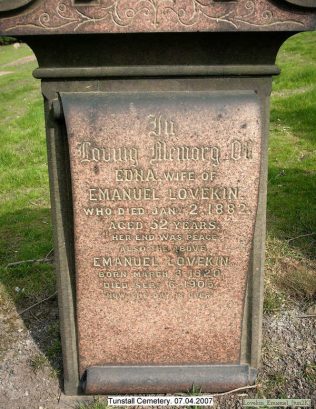 Emanuel Lovekin was born on 3rd March 1820 near Bailiffs Row, Donnington Wood Shropshire. He was the 4th son of 7 sons and 2 daughters born to Thomas and Sina Lovekin. His father was a furnace man in receipt of large earnings which unhappily he thoughtlessly squandered. The public house absorbed much of his time, the half measure of malt which his mother brewed every fortnight was not nearly enough to quench his father’s thirst. His mother was a big strong woman who struggled to raise her large family.

When he was quite young, he was sent to an Old Lady’s School-her name was Tilly Wilson. She was a Primitive Methodist and Emanuel recalls sitting on a bench and learning songs, but not much else.

He married Edna Simcock in 1845 in Tunstall and they had 14 children- 8 sons and 6 daughters, of which 4 died sadly quite young. Edna died in 1881 after 36 years of marriage and Emanuel married Harriett Lowe in November 1882. Two of Emanuel’s sons- James and John- emigrated to Philadelphia in 1869 and Emanuel visited them there in 1887, sailing from Liverpool on the British Princess.

Emanuel was quite small for his age and was sent to work in the coal pits of Donnington and Wrockwardine at the age of 7 and half.All he could do was to open a door for the wagons to pass through but after a while, was promoted to drive a donkey.

When he was about 13, he broke his thigh whilst working in the coal mine and was confined to bed for 13 weeks. During this time, he felt a strong desire to learn to read. Friends he knew came to read to him and he started to attend night school. He attended Wrockwardine Wood Primitive Methodist Sunday School which in those days taught reading and writing. He excelled himself and learnt much biblical knowledge. ‘For which I had great cause to thank God ‘ It was here that he first felt a strong interest in Primitive Methodism which laid the foundation of his beliefs and morals for the rest of his life.

Working conditions and pay were very bad at this time and between 1839 and 1842 there was a lot of agitation with the Corn Law league and the Chartists. He felt great empathy to the cause of the Chartists and was soon selected as Secretary to the local Chartist club and was very earnest in this work. He collected funds and signatures for petitions, posted placards, arranged venues and organised processions and marches. He met with influential Chartists – John Mason from Birmingham, Arthur O Neill, Thomas Alford and Thomas Cooper and others.

He attended the Chartist meeting at the Wrekin in May 1842 which saw over 30,000 in the gathering. It was reported in detail in the Northern Star newspaper.

As a consequence of his Chartist activities, he was arrested on 18th July 1842 and charged with riotously and unlawfully assembling with numerous other persons of the parishes of Lilleshall and Shifnal in conspiring to raise the rate of wages. He was tried at Shrewsbury Assizes on 27th July and although he was found guilty, he was subsequently released on the basis of a surety. The 5 Chartist ringleaders arrested at the same time, and tried at the same time, were imprisoned for 12 months so Emanuel narrowly missed imprisonment.

Towards the end of 1842, he then went in search of work with better pay and conditions. He worked on railway tunnelling as well as quarrying the stone for the locks in the River Severn between Stourport and Worcester. However, by March 1843, he had wandered back to Tunstall in search of mining and quarrying work.

His faith was important to him and began attending Tunstall Primitive Methodist Sunday School where he met Edna Simcock- her father Richard was a coal miner too. They married in 1845.

Throughout his long and active life, Emanuel always maintained a deep interest in Primitive Methodism wherever he lived and served with credit in the highest offices of both Sunday School and Chapel.

In the early years of his married life, he taught adult classes of both young men and also young women. At this time, he was made assistant class leader to Mr Henry Binnell at Tunstall Chapel.

From 1845-1854 and Emanuel worked as a mining butty in several of the local coal mines in the area, including Turnhurst colliery

A mining butty was a man who had come up from the ranks of the workmen, saved some money to provide tools, timber, horses etc. for his business.. He was a sub- contractor and an intermediary between the mine master and the miners. He was primarily contracted to deliver the coal into carts and wagons at the surface at an agreed price. His duty was to get the greatest amount of work out of the smallest number of men and to keep down the cost of the coal and the repairs. Quite often, the owners and managers left it to the butty and his own devices, to the mode of getting the coal, to watch for the safety of the workers and to arrange their pay.

As a mining butty, Emanuel consequently moved from one coal mine to another as work demanded.

In 1854 he moved his family to Pitts Hill when he worked and attended Pitts Hill Primitive Methodist Chapel as a class leader for the men as well as a Young Women’s class there.

He then moved on to Chell but had many issues at work which eventually resulted in Emanuel taking the mine owners-his employers- to the Court of Exchequer to obtain wages due to his men. Emanuel Lovekin was dismissed by the mine owner, Mr Bowers, and sued the firm for £100 owing to him and his men in the county court. He won, but the colliery firm counter sued and lost. Lovekin again sued in the Court of Exchequer and won his £100 plus expenses under the Truck Act of 1831

Around 1857, Emanuel moved the family back to Tunstall, sat an examination and gained the required certification as a colliery manager. He worked at Scotia Colliery, amongst others. He also worked at Thomas Pearce’s colliery and Peakes colliery- John Nash Peake was a life long close friend.

He re-joined his friends at Tunstall Primitive Methodist and continued there as a class leader.

In 1865 he went into partnership to manage the New Invention colliery near Willenhall under the title of Lovekin, Tolley and Hartshorn.

He moved his family again to Lane Head in the Darlaston circuit where he was active in the Primitive Methodist Chapel at Lane Head. However, he had a difficult time there as the coal was no good and he fell on hard times. With a large family to raise, he was desperate. He recalls that time in his autobiography ……. ‘I remember being in a field and scarce knew what I was doing. I prayed to God to open my way. And I had such a manifestation of God’s mercies and goodness, that I felt sure I would see them all reared and see them do for themselves, a clear light. And God has blessed me this far.’

By 1869 Emanuel had moved his family back to Tunstall where he continued to work as a butty in several of the coal mines in the Tunstall area, and developed a water pump whilst sinking pits at the Whitfield colliery. He worked at Chatterley, The Tillieries, Racecourse, Silverdale, Rosemary Hill and several others. In 1891 he was working at Holly Wall mine and in 1895, at the age of 75, he was still working at Yield Hill Colliery for the Golden Dale Iron works owned by Williamson and Devonport.

He was involved in several mining accidents, risking his life on many occasions. Whilst working for John Peake, he recalls that I dropped into 18 yards of water, twisted through a place about 5 inches wide and came up unconscious and badly injured. His close friend and fellow butty, Thomas Brunt (also an active Primitive Methodist) was killed in an accident at the Red Shags mine in 1874.

He joined the Oddfellows at St Martins Lodge in Tunstall in 1844 which weakened his connection with the church for a while.

However, he served at various levels for 54 years at both Lodge level and District Level, as these two extracts from the Oddfellows Magazine reports:

1861- In October 1861 a presentation was made to Emanuel for his meritorious service as Lodge Secretary.

1898- In January 1898, well deserved honour was paid to Past Provincial Grand Master Lovekin, and recognition of his long and able service took the form of a framed address. Emanuel responded that, at the time of his initiation, the Oddfellows were looked down upon by both the Government and the public, but they had fought their way on…now ably assisted and recognised by the Government, and doing a good and noble work.

The initials PPGM signify that he had served a term as Provincial Grand Master, the presiding officer of the Potteries & Newcastle District (group of Lodges), a position of great honour and responsibility.

Services to Primitive Methodism and the Connexion

….Emanuel always manifested a deep and active interest in Sunday School work throughout his long life and filled with credit the highest offices. He taught adult classes of both young men and also young women……

……His was a beautiful character; he was one of the most patient of men…..

The only words of regret found in his diary in his last years were ‘……that he could not attend God’s house and work as of yore…I’m glad I did a bit for Jesus Christ in my young days…..’

1865-1869 Sunday School Superintendent and Class Leader for the Darlaston Circuit, at Lane Head

In 1894, he was presented with a framed address by Tunstall Primitive Methodist in recognition of his 25 years as Society Steward, in addition to his life- long service as a Class Leader and Sunday School Superintendent in the various chapels in the places in Staffordshire where he lived.

He died on 6th September 1905, smiling gently at his wife and daughter. His last words were ‘Now the day is over’ – quoting from the hymn it was his custom to sing to his grandchildren every night. This inscription is to be found on his gravestone in Tunstall Cemetery.

An Introduction; Education and Schooling; Habits and Beliefs; Religion; Life and Labour; Purpose and Audience; Politics and Protest; Home and Family; Life, Writing, Class and Identity;

Wellington H2A- May 1842 Radicals on the Wrekin; Chartism Part 2: The Summer of Discontent