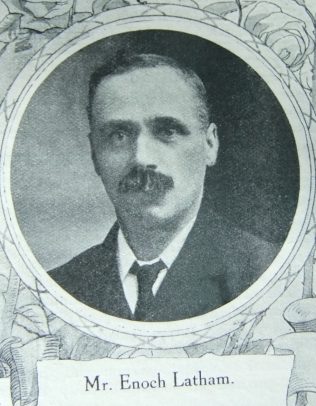 Mr. Enoch Latham, the Steward of the Oakengates and Wellington Circuit, was cradled in Primitive Methodism. His father was one of the old stalwarts who did great service for our Church in Shropshire. In his business Mr. Latham has been successful in a remarkable degree, and by the application of sound business principles to church and circuit life he has risen to the highest honour his brethren could confer on him. He has represented his circuit as both District meeting and Conference. During his term of office the Circuit has very materially prospered. He has applied himself assiduously to the reduction of debt on the circuit manse, and has given generously to the erection and re-erection of four new chapels. Largely through his advocacy the circuit has now taken a second preacher. We sincerely hope that many years of devoted service are before our brother.

Enoch was born in 1863 at Wombridge, Oakengates, Shropshire, to parents James and Sarah. James was a coal miner.

Census returns give the following occupations for Enoch.

Enoch died on 10 March 1953 at Shrewsbury, Shropshire. His probate record gives his ‘normal’ address as being in Llandudno, Carnarvonshire.