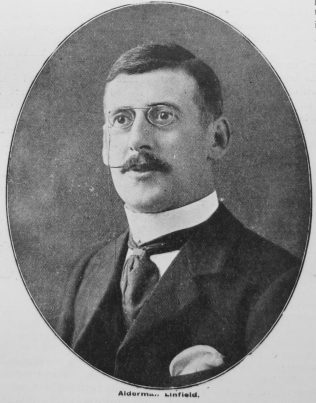 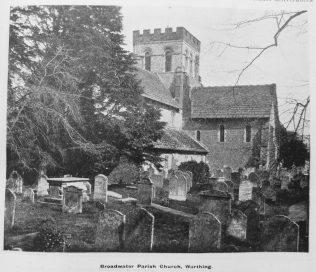 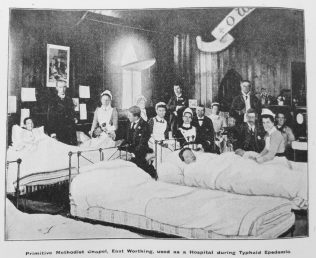 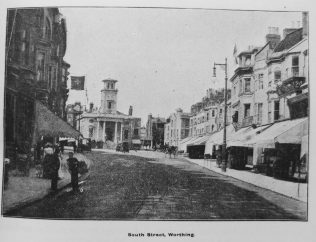 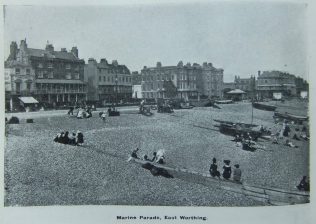 Transcription of Sketch in the Primitive Methodist Magazine by Joseph Ritson

We have had not a few successful Vice-Presidents, and the understanding by which this office always goes to a layman has more than justified itself by the results. Without in the slightest degree reflecting on the gentlemen who have occupied this honourable position in recent years it will generally be admitted that Alderman Linfield’s tenure of office has been in many ways unique. He came to the Vice-Chair earlier than is usual, and he has undoubtedly had an admirable training for the office. Few men in the country have at his age occupied the position of an Alderman for so long a period, and this no doubt contributed something towards that mastery of the rules of procedure which was evidenced by the Vice-President at the last Conference. But this lengthened experience would have done little for some men. You cannot get a silk purse out of a sow’s ear, the proverb hath it; and long experience and training have in the case of Alderman Linfield only served to develop and perfect a natural gift for ruling a public assembly. We had an extremely able President last year, and yet even his conduct in the chair did not win more admiration than that of the Vice-President. And this in so young-looking a man excited surprise. Well as Alderman Linfield was known to the Connexion it had not as yet discovered quite his remarkable executive ability. Hence his readiness and resource, his thorough knowledge of the rules of debate, his quick, alert, business-like manner, his unfailing geniality, his firmness, and the delightful way in which he resolutely “put down” even prominent members of the Conference when they were out of order, won the admiration of delegates and visitors alike.

A Vice-President however, might be very effective in the chair, and almost a total failure in the discharge of those varied duties which he is expected to perform during the year. The cool masterful man of business is apt to be cold and didactic in the pulpit, and on the platform. And yet it is just here that Alderman Linfield, has most distinguished himself. His year of office has been in consequence a remarkable success. He does not pretend to be a great preacher, nor has he the gift of making speeches of marked intellectual and literary ability. And he never tries to preach great sermons or deliver great speeches. He possesses that priceless knowledge, the knowledge of himself and is careful to work within his limitations. His visits to our churches have been full of inspiration and blessing. The keen business man has become an effective evangelist. His quiet addresses and sermons have been marked by a beautiful simplicity, and a directness of aim which have made them far more telling than more elaborate deliverances would have been in the case of many other men. Hence he has had the joy of seeing conversions often Sunday after Sunday, and when we met him towards the latter part of April, he had not been away a single Sunday of this year without witnessing cases of of conversion. We cannot help thinking that his year of office in this respect has been unique, and a striking manifestation of that new spirit of evangelism which is happily revealing itself throughout the Connexion. We have rarely met a man who so quickly managed to make himself at home with a strange audience. He is on good terms with them at once, and before the close of the day in all likelihood they will count him a friend.

The face and figure of the Vice-President have by this time become familiar to thousands of our people in various parts of the country. His youthful appearance has been matter of common comment. He would pass well enough for a little over thirty, and yet he is on the wrong side of forty. About the middle size and slenderly built he is yet vital to the tips of his fingers. His temperament is active to a degree, and he must run off a great deal of energy in the course of a day. Judging from his youthful appearance and the sunshine that seems to radiate from his face, it might be supposed the Vice-President had never known suffering or sorrow. And yet few men outside the medical profession have looked on death so often, while suffering, sharp and prolonged, was at one period of his life his daily and nightly companion. The story of the terrible typhoid epidemic at Worthing has often been told, but to many of our readers nevertheless it will be now. At the time of the outbreak, Mr. Linfield was a member of the Town Council, a Methodist and a Radical. He would be then about twenty-six years of age, and with his way to make in the world. The water supply of the town was running short, and an effort was made to tap a new spring. This was successful, and the result was that a supply was obtained which promised to meet all the needs of the town for some years. But success in this case meant disaster. The abundant supply caused the water to rise much nearer the surface than formerly, so near that it came into contact, with the remains of an old sewage farm, and the entire supply was poisoned. This did not however interfere with the appearance of the water, which was so beautiful in taste and colour that nobody suspected at first that the outbreak of typhoid was due to this cause. The epidemic spread with alarming rapidity, until nearly every house in the town was affected. To cope with this terrible outbreak was no easy matter. For a time the authorities were paralysed; but two men, the Brothers Linfield, rose to the occasion and worked day and night to relieve the suffering. Amongst other buildings the Primitive Methodist Chapel was turned into a hospital. We had just, built a new church, and the old iron chapel was available for this purpose. This step was decided on one Thursday evening, and within twenty-four hours, thirty-six beds had been placed in the building, and a staff of nurses and doctors secured from London. It was found early in the outbreak that many patients were fatally injured by the careless way in which the ambulance work was done. Mr. Linfield took this work in hand, and himself carried some hundreds of patients from their homes to the ambulance in the street. He often helped to remove the bodies of the dead from the hospital, and tells how on one occasion when he had hired a tramp from a lodging house to assist him in this work he found on striking a match in the mortuary, he was in the presence of two other dead bodies. It must have been a terrible experience through which the young town councillor passed. Large numbers of people fled from the town, and this made it all the more difficult to cope with the emergency. The authorities came in for the wrath of the populace, and when the reckoning day came round at the next Municipal Election most of the Council either declined to face a poll or were defeated. But the heroic services of Councillor Linfield, met with a speedy recognition. At the first Aldermanic vacancy he was elected, notwithstanding his non-conformity, his politics and his youth. A suspicion of an intention on the part of the authorities to exclude him from the honour aroused the indignation of the people to a white heat, and even Tories used strong language at the bare idea of such a piece of injustice. From that time Alderman Linfield has been held in high honour by his fellow townsmen, and we have no doubt they will in due course confer upon him the highest dignity in their gift.

The tremendous strain of the epidemic told on Mr. Linfield. He several times was threatened with the fell disease, but on each occasion succeeded in throwing off the contagion. He not only nursed the sick and attended to the dead, but went from hospital to hospital with a portable harmonium conducting little services for the invalids, and in fact turned his hand to anything. One day a hawker refused to take his medicine. Mr. Linfield happened to be in the hospital at the moment, and the baffled nurse appealed to him for help. Taking the patient in his arm Mr. Linfield managed to induce the man to swallow the medicine. Despite his obstreperousness the patient was not ungrateful, and looking up inquired, “What’ll you have to drink Mr. Linfield?” The tremendous strain of the epidemic was followed by a serious break down in health from which Mr. Linfield did not recover for four or five years.

Religiously the Vice-President has had a somewhat unusual experience. Brought, up in the Church of England he was, when a mere boy and while preparing for Confirmation, asked one Sunday to play the harmonium at the Primitive Methodist Mission room. He consented but does not seem to have quite appreciated the, to him, odd ways of the Methodists, and was rather desirous of terminating the engagement. When his father was appealed to for permission for his son to play the instrument regularly, he said he must first go and see what these people were like. His verdict was that he did not see any harm in them. When the fact became known at the Established Church pressure was employed to induce the father to veto the arrangement. In fact it was a choice between harmonium playing and Confirmation. He declined to give a promise not to attend chapel. In the end the Confirmation was allowed to proceed. By degrees the boy began to gain some understanding of religion, although at first the language of the chapel was unintelligible. But at length he found the truth and was led into the joy of assurance. In consequence of these early experiences the Vice-President has a good deal of sympathy with bewildered Churchmen; he knows how difficult it is for them to understand a religion that knows nothing of baptismal regeneration. To Alderman Linfield his year of office has been one of joyful service. He is of opinion that the Connexion has before it, in the immediate future, even greater success than has been realised in the last two or three years. Everywhere he has found the people expecting blessing and full of enthusiasm and devotion. We were glad to find him at the end of April fully recovered from the sharp attack of pneumonia which laid him aside a few weeks, and his first Sunday after resuming work, though consisting of three services and a long and exciting prayer meeting, left him as alert and vigorous as ever. Indeed it was difficult to get him away from the Church, and during the rest of the evening he submitted to the interview, in the course of which most of the information contained in this article was obtained, without any signs of weariness or exhaustion.

Frederick was born in 1861 at Worthing, Sussex, to parents William Linfield, a tailor, and Anne Caeser. In 1871 William was a collector of town rates for the local board of health.

Frederick was Mayor of Worthing twice from 1906-8. He first stood for parliament in 1910 in the Horncastle, Lincolnshire constituency but was narrowly defeated. He was again defeated in 1911. In 1922 he was the Liberal candidate for Mid Bedfordshire and won the seat. He lost his seat in the 1924 election, having to campaign remotely, as he was in Africa as a member of the East African Parliamentary Commission.

Frederick married Kate Ayres (1861-1929) in the spring of 1884 at Worthing, Sussex. Census returns identify three of our children.