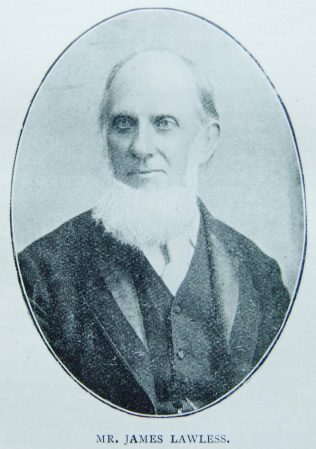 Transcription of Sketch in the Christian Messenger by J Gillender

It is by the early possession and the faithful keeping of a “good name,” long service as a local preacher and Sunday school worker, and great devotedness to the Connexion, that we deem our brother worthy of an honoured place in this magazine; and, unless we are greatly mistaken, many of our readers will be glad to have a few particulars respecting him. The writer is neither a “thought reader” nor a “delineator of character,” but he presumes to think that our friends physiognomy somewhat indicates the integrity, cautiousness, tact, reliableness, and the general refinement which have been found to be characteristic of Mr. Lawless. Though born in Manchester, most of his youth was spent at Warrington. When thirteen years of age he joined our Church as the direct result of Sunday school labours; and it seems most fitting that now he should devote his main energies to this excellent institution. He came to St. Helens when twenty-two, and of course at once joined the “Ranters,” who then worshipped in a rented room at Greenbank. For about half a century has he been a lay minister of the Word, and he has some vivid reminiscences respecting the long, lonely journeys and the “choice morsels ‘’ our brethren had in the early years of our Church. There is scarcely any official position in the Society and Circuit that Mr. Lawless has not at some time occupied. For a long period has he been a Class Leader, Treasurer to the Trust, and Sunday School Superintendent. He has also been Circuit Steward. The Station has frequently and well been represented by him at District Meetings, and when the Conference last met at Newcastle-on-Tyne he was one of the District’s delegates. Mr. Lawless is a tailor by profession, and for some years did “good business,” and even now he is swift at “threading the needle,” and occasionally he finds delight in garment-making. Almost all his children and grandchildren are associated with St. Helens Primitive Methodism. One of the sons-in-law, Mr. James Noad, is an acceptable local preacher and choir-master; another, Mr. John Tindle, is one of the Secretaries to the Trustees, and a Sunday school teacher. Mrs. Lawless is also an old “Prim,” and has rendered good service as such. The P.M. World, a little time ago, published a Teetotal Roll of Honour, and on this “Roll ” did Mr. Lawless appear, and we- now have no fear of the “pledge” being broken! Our friend has not been without tokens of appreciation of his character and work, but perhaps one of the best is the illuminated address which was presented to him by the teachers and scholars of the very school he now so efficiently superintends, and in which he experiences inexpressible delight and satisfaction. Perfection, of course, is not claimed for the subject of this sketch; but we believe – what we were told before our knowledge of him were so intimate – that he has been a “tower of strength ” to our Church, and we sincerely trust that, by the good providence of God, he may for some years be spared to us. The house in which our brother lives is next to our school in Kirkland Street; and which street, by the way, was named after the late Rev. Ambrose Kirkland, Primitive Methodist minister, and whose son is now in our ministry.

James was baptised on 14 August 1831 at Manchester Cathedral. His parents were John, a tailor, and Ellen.

James worked as a tailor.