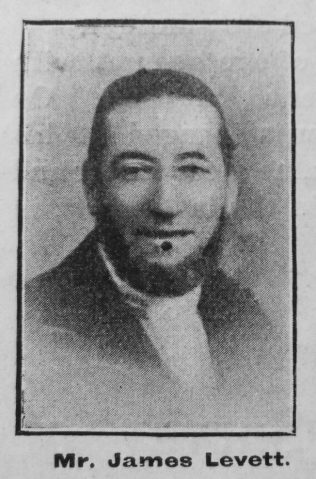 Transcription of Obituary in the Primitive Methodist Magazine by John Bailey

The subject of this memoir, Brother James Levett, was born on August 4th, 1845, at Kinnersley Castle, near Ross, in the County of Hereford. When he was quite a little boy his parents removed to the beautiful city of Bath, and again, after a few years, to Portsmouth.

James’ parents were good people, and soon after their arrival in Portsmouth they attended the Primitive Methodist Jubilee Church in Somers Road, Southsea. Here, while quite a youth, the greatest change which ever comes into the human soul came to James Levett. He was converted. He immediately connected himself with the Somers Road Society, and was soon afterwards put upon the plan as a local preacher. This position our friend maintained with considerable credit and much honour to the day of his death – a period extending over thirty years.

At the time of his death he was connected with the Church worshipping in the Southsea Central Hall, and was holding several offices. Besides being a local preacher he was the circuit secretary, class leader, sidesman, and member of the chapel committee. He was a trustee for some of the estates on the Portsmouth I. Circuit, and was a member of the District Committees. He had represented his circuit at the annual District Synod, and once represented his district in Conference. He was a very cautious man – always looking before he leaped, and consequently seldom leaping. It is generally thought that if he had had a little more enterprise it would have been none the worse for his business, nor for his Church. The fact of his being somewhat of a Conservative in politics may account for much. But he lived an exemplary life and bore an unimpeachable character. His services were much in demand to preach in village Chapels of various denominations within a few miles of Portsmouth, and it was one of the greatest delights of his life to preach Christ to the country folk on a Sunday.

He was married twice, leaving at his death, two sons by the former wife, one of whom is in South Africa; the other is now the support of his widowed step-mother.

When fifty-eight years of age he met with an accident which hastened his end. On September 2nd, 1903, he was engaged at his employment, in Southsea, as a carpenter and joiner. He was driving in the last screw, in a piece of work, before dinner, when the scaffolding gave way and he fell helplessly a distance of about ten feet. He was stunned, and very much shaken and bruised by the fall. He lingered for eight days, in great pain, and on the 10th’of September passed peacefully home to rest without a murmur or a groan. He was visited by his pastor and several friends of the Church, to whom he expressed great hopes of soon recovering and renewing his much-loved work for his Master. But the Lord saw otherwise. He was buried on September 15th, in the Portsmouth Cemetery, after a service conducted by the writer, in the Southsea Central Hall, amid a large concourse of sympathetic friends. His body was borne to its last resting place by his brethren of the Church amid signs of deep feeling and sorrow.

On Sunday evening, September 27th, the writer had the melancholy pleasure of preaching his funeral sermon to a large and deeply affected congregation. Peace to his memory. He sleeps with the just. Sleep on thou man of God, and when the day dawns and the shadows flee away, we will greet thee.

James married Martha Elizabeth Young (abt1859-1919) in the summer of 1891 in the Portsea Registration District, Hampshire.