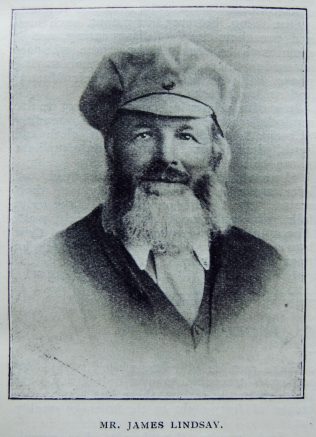 Transcription of Sketch in the Christian Messenger by John Parkin

The subject of this sketch, whose portrait appears below, is one of ‘‘nature’s true gentlemen,” genial and genuine, homely and honest, “a Primitive in whom there is no guile.”

He is a man of quaint personality and simple life, seeking no office, clamouring for no position, the type of man whose transparent life and quiet walk of faith is as the salt of the earth.

Mr. James Lindsay is a local preacher in the Appleby Branch of the Brough Circuit.

Previous to the formation of the branch four years ago, his name held the highest position but one on the preachers’ plan of the parent Circuit.

He is 70 years of age, and was born in the county where he still lives – Westmoreland.

He was born in the dale part of the county, but has lived the greater part of his life on the very edge of the Pennine Range, near to Roman Fell, in the quiet little village of Hilton-Cum-Murton, where the “Helm wind blows.”

He has little to relate of his young days or home life, his real interest in life dates from his conversion which took place in 1850.

It was in connection with a tea meeting whilst listening to a speech by Mr. John Slinger, a powerful preacher of that time. He commenced preaching soon after his conversion, and all through the years has been actively engaged as a most acceptable “local” in a Circuit sixty miles in circumference.

He has not yet applied for superannuation and is unlikely to do so for some time to come.

His sermons are usually of a high order, containing sound doctrine and lengthy application.

An ex-President of the Primitive Methodist Conference told the writer that he once heard him preach a sermon on “The pale Horse and its Rider,” and it was the best sermon he ever heard on the subject.

When having a good time – and he seldom has a bad one – he is very demonstrative, making the chapel ring with “Glory,” “Yes,” “Hallelujah.”

He can preach for an hour without a note, but cannot stand still. He is a moving preacher in more ways than one.

His is a temperament for “rostrums” (not pulpits) where he can walk at will, and preach as well.

He lectures on “The Devil,” “The Devil outwitted,” “Practical Religion,” “Professors and Non-Professors.”

He is a great reader of Connexional literature and delights to talk about the stalwarts of Primitive Methodism.

In the village where he resides there is no Primitive Methodist cause, and when not planned away, he worships with the Wesleyans and the Free Methodists.

’Mid all the changes, however, that the years have brought, he has remained loyal to the Church of his choice, having his membership at Dufton, three miles distant.

Some years ago, the writer had to attend a missionary meeting at this village, and on the day of meeting, Mr. Lindsay came to him and, putting a two-shilling piece down, said, “Put that in the collection box for me.” Then depositing a similar coin, said, “And get someone to put that in the box on Sunday afternoon,” and then handing out still another florin, said, “And get that put in the box on Sunday evening.”

To such men Primitive Methodism stands for more than a group of villages, or a Circuit, it is identified with religious and philanthropic movements and far away places. It is linked to countries beyond the seas.

This type of man is much needed to-day, the Connexional man, whose loyalty will stand the accident of isolation.

Our brother lives all alone, his wife having left him some years ago for “the home beyond.”

He bakes, washes, sews, and knits. The suit in which he is clad on Sundays, and in which he goes to preach is a knitten one – his own making – even his hat his hands have made. Everything he wears has been manufactured by himself, except his clogs.

He is known in many places as the “clog preacher.” Summer and winter, to village chapel and town church he goes in his clogs, and does not change them for shoes when he gets to his destination. It would be a great disappointment to many if he had to ascend the rostrum in shoes.

When he journeys to his appointments, it is on a tricycle, which he works with his hands and not his feet, and guides with his back.

Nothing delights him more than to talk about meetings, religion, and preachers. With him there are no failures among preachers, he has an appreciative note for them all. We excuse him, of course, when he manifests a weakness or preference for those of his own communion.

On a recent date he invited the lady members of the Appleby Church (who were preparing for a Bazaar) to a sewing meeting tea, which he himself had prepared, and gave them work to finish (a quilt) which his own hands had commenced.

He is an out-and-out teetotaler, and uses strong language on platform and in pulpit to express his abhorrence of the drink traffic.

Some years ago, when acting as a carrier to and from Appleby on market days, he was asked to take a keg of spirit from the brewery, which he bluntly refused to do, saying that if the devil had to go into his village he should not go in his cart.

The real worth of such men, so unostentatious in all they do and say, their true place in the history of village life, it would be difficult to state.

One thing, however, is patent, such men and preachers are fast disappearing, and it remains to be seen whether those who are succeeding them will have the same staying power, will be as faithful to their Master, and as loyal to their Church.

It is of such men as James Lindsay we are reminded more than once in reading “Crockett’s Books,” “Homespun cloth and herds’ plaidies cover many a man of ancient name this day.”

“I am thinking that it is not the high and lofty ones who sit most securely on their seats. The Lord is on the side of the quiet folk, who only work patiently and wait. The mighty may take the eye with their bravery, but the victory is won by those who wear the homespun.”

James was baptised on 20 October 1833 at Ravenstonedale, Westmorland. His baptism record identifies his parents as Richard and Agnes. By the time of the 1841 census Richard was married to Elizabeth. Richard was a stone mason.