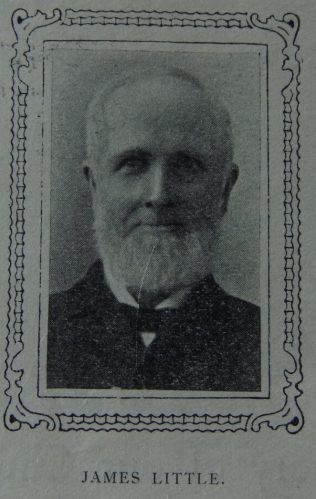 MR. JAMES LITTLE was born at Hook, in the parish of Lydiard Tregore, Wilts, 1842. He was converted to God, and became a member of the church in 1860. His life has been exemplary for virtue, and devotion to the cause of religion, and faithfulness in the work of the church. He has been a class leader for thirty years, as well as a Sunday school teacher for most of that time. His class at Clifton Street forms a large part of the society, numbering upwards of fifty members, every one of whom has a sincere regard for him. He has shown the true spirit of Christ in the church and among men.

The distance he has had to walk is now too much for him, but nearer his home he will still serve the cause in earnest and with acceptance.

His piety is thorough, and often the enthusiasm of his spirit manifests itself in exclamations of joy and praise. Being of a kind disposition, he has the art of sympathising with any who are in sorrow, and encouraging them to be patient, and prayerful.

Brother Little has great influence with each of the members of his class. This is commendable in all class leaders. To allow the class meeting to wane and die will be a serious mistake. The need of such men as our brother in our own Connexion is great. There is always the impression that our friend lives in close fellowship with Christ, and the members realise that they have not only a friend, but a man of God with them.

Our brother has for many years had a note to take occasional services in some of our chapels. His work in this department has been well received, and often sought after.

James was baptised on 6 February 1842 at Lydiard Tregore, Wiltshire. His parents were Thomas and Mary Ann. Thomas worked the land.

James initially worked the land, but by the time of the 1871 census he had become a labourer on the Great Western Railway.

James was married to Ann (abt 1846-1916). Census returns identify five of six children.