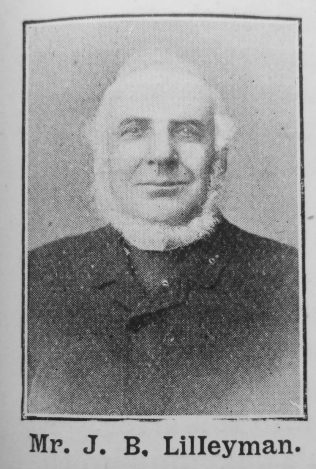 Transcription of Obituary in the Primitive Methodist Magazine by Joseph Johnson

The Swinefleet Circuit has just lost an old and faithful worker in the death of Mr. J. B. Lilleyman, its Circuit Steward. He was converted under the Rev. Featherstone, and immediately connected himself with our society, and for nearly sixty years he was in church fellowship with us. He was our oldest member and local preacher, and in the latter capacity rendered splendid service as long as health and strength permitted. He has held the offices of class leader, Chapel Treasurer, Society Steward, and Circuit Steward, and he was a member of the District Committee. He has represented his Circuit at District Meeting, and his District at Conference. He was liberal in his support of the Church, and was regular in his attendance at the means of grace, both on Sundays and Week evenings, and took great delight in the class meeting. His house was a home for both travelling and local preachers. He was a loyal and warm-hearted Primitive Methodist, an earnest, sincere, broad-minded Christian. On the 5th of last December Mr. and Mrs. Lilleyman celebrated their golden wedding, on which occasion the society presented them with an illuminated address. Mr. Lilleyman suddenly and peacefully passed from earth to heaven on Sunday, July 28th, in the 78th year of his age, and on the following Tuesday, amidst a large and sympathetic company of relatives, friends, and neighbours, his remains were laid to rest in Swinefleet Churchyard. He leaves a widow and two daughters to mourn his loss. The writer preached his funeral sermon to a sympathetic and crowded congregation from the words: “So shall we ever be with the Lord.”