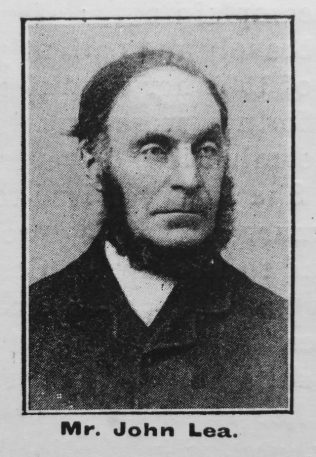 Transcription of Obituary in the Primitive Methodist Magazine by W.L.

The subject of this memoir was for sixty years a most loyal and consistent Christian, and a devoted Primitive Methodist. He was born in 1822, at the Hough, Cheshire, and by marriage related to the Bournes of Bemersley. When young his father removed to the Lodge Farm, Hatherton. The family up to this time worshipped at the Established Church. Mr. Lea, when he was about twenty years of age, received his first class ticket on joining the Hatherton Primitive Methodist Society in the Crewe Circuit. For several years he was an active worker in this society with Mr. T. Austin, who is still in full work as an old veteran.

During all these years in connection with these various societies he had always been much respected for his quiet consistent life. For many years he was a much beloved class leader. To the writer, several persons, on learning of his death, responded, “that thirty to forty years ago they were in his class and that a better man than John Lea they had never known.” Many of the old ministers were known to Mr. and Mrs. Lea, and their home was always open to them, and their visits and company were much enjoyed.

At a memorial service in Ellesmere Chapel a large congregation assembled, when Mr. Ellis, of Wrexham, who was the preacher gave his testimony to the memory of the departed as follows:- “The church in Heaven is richer through the removal by death of our revered and much beloved Bro. John Lea. We are here to-day to testify to his high Christian character and moral worth – here to render to his memory our tribute of respect.”

The fruits of love, joy, peace, gentleness, goodness, faith, meekness, temperance, abounded in his life. It was rich in Christian graces. Our brother was an epistle of Christ read and known of all men, a man noted for his piety, a spiritually-minded man. He was no critic, could always appreciate anything which told of God’s love and pardoning grace. He was a man of one book, the Bible; faith and prayer were to him as his vital breath – his native air. He was a man of fervent praise, the embodiment of happiness, one who could never understand a man having just enough religion to make him miserable. Our brother walked with God from his youth – in open communion as a Primitive Methodist. God took him home on Sunday, March 15th, 1903. He was found ready, like a parcel tied up, labelled, waiting for the carrier to call and take him to his destination. His presence at service was always an inspiration; we miss his hearty and devout “Amen,” but be yet speaks to us. One who once lived with him said, “If I had lived much longer with this man I should have become a Christian in spite of myself,” – such was his influence – a saviour of life unto life. His life was an eloquent monument brimful of faith and good works.

John was baptised on 7 July 1822 at Wybunbury, Cheshire. His parents were William, a farmer, and Sarah.