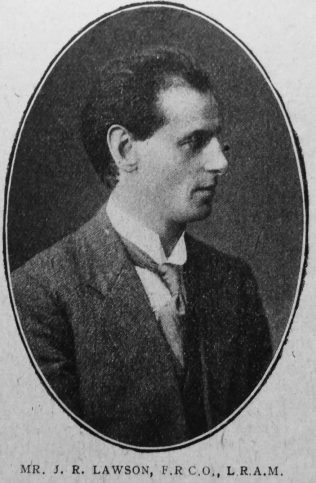 Transcription of ‘Sketch’ In the Christian Messenger by J.G. Bowran

On the last Sunday in March we were privileged to take part in the Church Anniversary at Portobello, Hull, and there we became acquainted with Mr. John Richard Lawson, the organist and choir-master of the church. We had often heard about him, and of the service he was rendering to our people there. The musical part of the service was of the highest order, and it is a real pleasure to be able to speak of his career.

Mr. Lawson was born in Hull in January, 1889. When ten years of age, he commenced the serious study of music under Mr. Arthur Vear, the well-known organist in Primitive Methodist circles. Under the same teacher four years later he began to learn the organ. He passed several Trinity College examinations at Hull, and the Senior Division with the highest marks in the year 1904. His first organ recital was given in an Anglican Church (Christ’s Church) in March, 1905, and was so successful that a repetition was demanded in the following June. In September, 1905, he entered the Royal Normal College of Music and Academy for the Blind in Upper Norwood, London. Here he obtained a scholarship which he held for five and a half years. He received the very finest training from such well-known professors as Mr. Stewart Macpherson, F.R.A.M., Professor of Harmony and Composer at the Royal Academy, Mr. H.L. Balfour, Organist of the Royal Albert Hall, and Mr. Fritz Hartvigson. In January, 1909, he secured the degree A.R.C.O., in January, 1910, F.R.C.O., in December 1910, L.R.A.M. Leaving the College in March, 1911, he returned to Hull, and was appointed to his present position at Portobello. The new organ was installed in March, 1912, and Mr. Lawson had the honour of giving the opening recital. Since then he has given upwards of twenty-five recitals in his own church. Three years ago he visited the Hartley College and gave a recital on the chapel organ.

Mr. Lawson is also a composer, and we had the pleasure of hearing some of his hymn tunes as well as other pieces. It is wonderful how expert he has become in our Hymnal and Supplement, and his influence in the choir and the congregation is of the most inspiring kind. He fills quite a unique place in the life of the church, and is full of interest in all its activities. We pray for Mr. Lawson an ever-increasing usefulness in his high vocation.

John was born in Hull, Yorkshire, to parents Richard and Edith Mary. Richard was a master mariner.