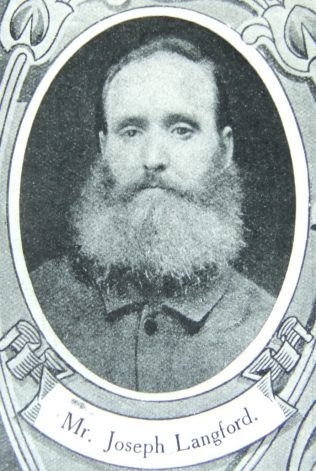 Mr. Joseph Langford, of Ruabon, is Senior Steward of the Rhosymedre Circuit. Born near Ellesmere in 1832, he is now in his 77th year. When a youth he removed to Overton, and during a revival, when about 16 years of age, gave himself to God, and became a teacher in the Sunday School, and twelve months afterwards became a local preacher. In this capacity he has rendered excellent service, intensely earnest and looking for immediate results, scores have been led to Christ through his ministry.

Fifty-eight years ago he removed to Ruabon. He has stood true to his Church and served her interests as Class leader and Chapel treasurer.

In 1900 he attained his jubilee in Primitive Methodism, and his brethren signified their appreciation and esteem by presenting him with an illuminated address.

Full of faith and hope, he calmly awaits the call to the higher service.

Joseph was born in 1832 to parents Thomas and Jane. Thomas worked the land. Joseph was baptised  on 26 May 1832 at Ellesmere, Shropshire.

Census returns give the following occupations for Joseph.