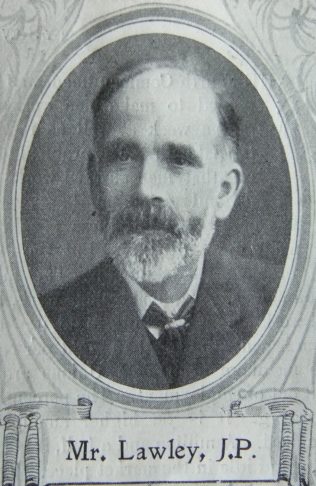 Councillor Joseph Lawley, J.P., of West Bromwich Second Circuit, is one of those of our Chancellors who set an example of personal liberality which is always inspiring. He has held the office ever since the Circuit was formed, and no one ever thinks of a change. In the town of his birth, where in his early manhood he worked with his hands as hard as most men, he occupies for a second term the position of Mayor; and it is freely said that the duties of the Mayoral Chair were never more efficiently performed. His association with our beautiful Church at Lyng is so intimate that one can hardly think of it without also thinking of him; to his large generosity and that of his brother (Councillor William Lawley, J.P.) that Church will ever stand as a fitting memorial. He has exceptional tact and insight, and many other gifts which go to make him strong and influential. The name he bears has stood for much in the Primitive Methodism of this District, and we pray that his influence may abide.

Joseph was born abt 1848 at West Bromwich, Staffordshire, to parents William and Susannah. William was a moulder in an iron foundry.

Joseph followed in his father’s trade, but by the time of the 1891 census, he had become an iron founder, operating a business with his brother William in Sams Lane.

Joseph married Eliza Walker (1847-1898) in the spring of 1871 at West Bromwich. Census returns identify one child.

Joseph died on 19 December 1917 at Roebuck-lane, Smethwick, Staffordshire. He left an estate valued in excess of £20,000.