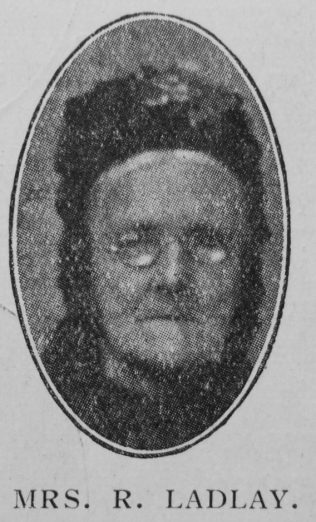 Transcription of obituary published in the Primitive Methodist Magazine J.G.B.

In the translation of Mrs. Ruth Ladlay the Stockton Circuit has lost its oldest member. She had reached the great age of ninety-two years and five months. When quite a young girl she attended the old Maritime Street Chapel. By and by Paradise Row became her home, and her interest and devotion to the church deepened with the years. Her husband, the late Mr. William Ladlay, was the superintendent of the Sunday School for many years.

All who knew her recognised in her some of the finest traits of the Christian life. She came to a beauteous old age, with the heavenward glance and the lovely soul. It was a means of grace to be with her.

All the members of her family are devoted to our church. Mr. J. W. Ladlay  is widely-known in the Carlisle and Leeds Districts as well as in his native area. He is an ardent supporter of the Harehills Avenue Church, Leeds, and he is also the president of the Leeds Primitive Methodist Council. Mr. T. Ladlay is one of the trustees of our Tatham Street Church, Sunderland. Her daughters, Mrs. Parrott and Miss Ladlay, are with us at Paradise Row, while her grand-daughter, Mrs. J W. Gargett, is known for her interest in church and connexional enterprises.

It is delightful to know that in the declining years of our friend she was tenderly nursed by her daughters and grand-daughter, and that her sons and Mr. J.W. Gargett were solicitous to the last. She lived in love and often confessed her pride and gratitude. She was laid to rest in the Oxbridge Lane Cemetery, Stockton, on Monday, August 12th, 1912, the Rev. J. G. Bowran conducting the service.

“Precious in the sight of the Lord is the death of His saints.”

Ruth was born abt1820 at Stockton on Tees, Co. Durham, to parents William Palmer and Elizabeth Pickering.

After her husband’s death, Ruth worked as a confectioner (1881).

Ruth died in August 1912 at Stockton on Tees, Co. Durham.