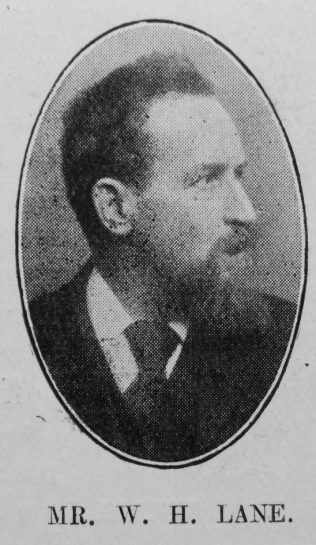 Transcription of Obituary published in the Primitive Methodist Magazine by S.A. Barron

A great loss has befallen the Humberstone Road Church, Leicester Third Circuit, in the death of Mr. William Henry Lane, its much esteemed Society Steward. Our departed friend was brought to God many years ago through the evangelism of an undenominational mission; and in connection with work of this kind he continued for a considerable period. He really found his true sphere, however, upon joining our church some twenty-seven years ago. Mr. Lane proved to be a great acquisition. Through the years our brother has toiled earnestly and unremittingly, “always abounding in the work of the Lord.” He has filled various posts in church and school, making for himself a respected name amongst the officials of the church and circuit. Equable in temper, charitable in feeling, kindly in speech, and open handed in liberality, his life was full of

“The little, nameless, unremembered acts
Of kindness and of love.”

The outstanding feature of excellence in him was perhaps his conscientiousness. He was a man of scrupulous integrity, carefully observant of every detail of obligation, filled with a passion for righteousness. Whatever he undertook to do, was faithfully done. He was always there; always in the right spirit; always prepared by gift and work to do his part. In all his Christian service, he has had the sympathy and support of his excellent wife, who now, in greatly weakened health, mourns his loss. They have trained their children to love the cause of God, and the family is rendering useful service.

The close of our brother’s earthly life came with some suddenness. Early in July last, he had been at class, taking his usual devout and earnest part. During the night a seizure came on, taking the power of articulate speech, and reducing him to helplessness.. He lingered for three weeks, and on July 28th, 1908, his sufferings ended, and he was received into eternal joy. The large attendance and the sorrow displayed at his funeral and at the memorial service conducted by his old friend and official colleague, Mr. D. Sharpe, and the writer, testified to the affectionate respect in which he was held.

William was born in 1850 at Leicester, Leicestershire, to parents Francis, a shoemaker, and Ann.