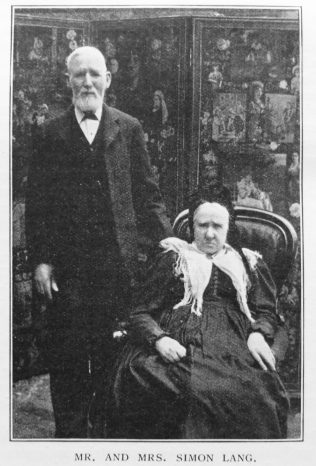 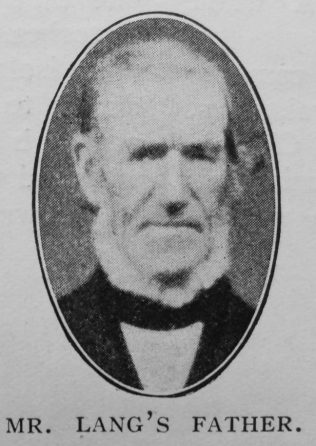 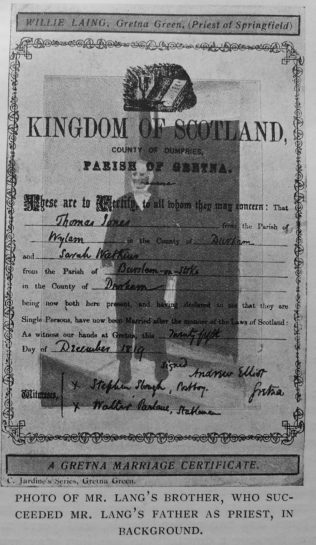 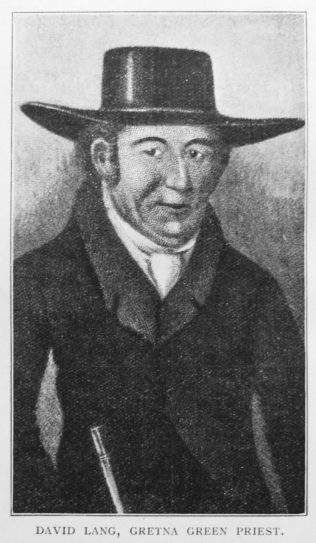 ONE of the most surprising men it has been my privilege to know is Mr. Simon Lang, of Felling-on-Tyne. If one could get at the full experience of our friend, there would be material for a volume of a most romantic kind.

Several times has he been asked to write the story of his life, but he always replies, “What’s the use, the people would not believe half of it.” The information has simply had to be wheedled from him to make even a bare sketch possible. What gives Mr. Lang’s life so much interest, is the fact that he was born at Gretna, and his grandfather, father and brother performed the runaway” wedding ceremonies there. Mr. Lang smiles as he relates how he married a couple himself on one occasion.

These weddings have made the place quite renowned. They were quite legal according to the law of Scotland. Their convenience lay in the fact that a simple acknowledgment before witnesses was suffcient to constitute the marriage legal. No notice was required, and the ceremony could be performed by anyone, at any time, night or day. Gretna Green, just being on the Borders, it became a popular place for the English “runaways.” Parties rich and poor rushed to the place on foot and on horseback. Often they were pursued, and it was no rare thing, Mr. Lang tells us, to have the pursuers on the heels of the parties, with only time to snatch in the brief ceremony.

Sometimes they would be met on the bridge that linked the two countries, and immediately they got on the Scotch side, the ceremony would take place. With the certificate duly signed, they went on their way rejoicing—or otherwise. A stop was eventually put to these marriages when, in 1856, an Act of Parliament was passed requiring that one of the parties should reside in Scotland at least twenty-one days previous to the marriage.

Mr. Lang holds the old registers of these marriages, and I was surprised to find when he granted me the privilege of perusing them, that some of the records go as far back as 1794. Sometimes he is approached by the aristocracy for copies of the register of marriages of their relatives.

To go back eighty-five years, which is the period of Mr. Lang’s life, is to find a different condition of things altogether from what now exists. Flying machines and motor cars were then not conceived of by any except highly imaginative people, and even the railway was only coming into existence, the first being opened in 1825 (Stockton and Darlington), the year of Mr. Lang’s birth. The means of transit available at that time were “the wagon for the poor, the stage coach for the middle class, and the post-chaise for the wealthy.”

We can conceive of many strange things happening, in securing even the necessities of life. Mr. Lang, as a boy, had many times to run from Gretna to Carlisle, a distance of nine miles each way, to secure a sheep’s head for dinner.

He must have been a brave boy. Once when there was trouble in a neighbour’s home, he was asked to seek aid through the night from friends living seven miles away. Although but ten years of age, he ran through the dense darkness and roused the people whilst the dogs barked wildly around him. All this tramping and running was done on bare foot.

He tells some strange stories of the times when salt was heavily taxed in England, and there was much smuggling from Scotland. If the English working man wanted to “cure” his pig after killing, for which much salt was required, he would attempt to smuggle the salt across the borders. If caught by the “Excise Man” and he refused to surrender, the smuggler could be shot down. Mr. Lang had pointed out to him one evening an officer who that day had shot a smuggler. Good old days!

Mr. Lang’s courting days commenced early. He and his wife played together as children. Their attachment continued during the years. At one time, their separation seemed to be threatened. The bride-elect was at that time engaged to a family as nurse, for sixpence a week, and they desired her to go with them to America. Their separation was not, however, to take place for many years, and then only by the stroke of death.

What a smile lights up the old gentleman’s face still, as he relates the great culmination of this companionship.

Says he, ‘I shore corn a whole day for a shilling, and then married my wife at night. It was the best day’s bargain I ever made.”

Mr. and Mrs. Lang were married in the Gretna Green fashion, but though this was legal, they decided to be married again at the Church of Scotland. Not often does it happen that two persons are married to each other twice, but what a happy union it was! Mrs. Lang was a noble woman. A whole sketch could not do her justice.

In 1854 Mr. and Mrs. Lang came to Felling. Soon after their arrival, Mrs. Lang joined the Methodist Free Church, having been induced to attend their class meeting. Mr. Lang was still a man of the world. His wife, however, had a great influence over him. One day his companion at work in the factory said to him, “Sim, there is something you and I are short of, and it is worth having. Let us go to old Willie Charlton’s class at the Primitives.” They went, and that night both were converted. In the meantime, the only child of Mr. and Mrs. Lang had found her way to the Primitive Sunday School, and that decided Mr. and Mrs. Lang to join the Primitive Methodist Church. That child afterwards became Mrs. Forster, one of the finest and most useful members ever associated with any church—a real mother in Israel.

Before his conversion Mr. Lang had been accustomed to gamble. One day he came home and placed about £20 on the table, which he had won. Mrs. Lang absolutely refused to touch it, saying it was the Devil’s Money. She never enquired again what became of it.

Never has our Church had two nobler souls. Mrs. Lang was for long a devoted class leader. Mr. Lang has not sought official position, but what a marvellous worker he has been in a quiet way! At one time the minister and his family at Gateshead were down with fever. They were isolated for three months. None dared to go near. But Mr. Lang, although living two miles away, went and attended to them, sometimes twice a day.

The writer will not forget the old man’s visits during a recent illness. Some times twice a day, always once at least, with tottering steps, clad in white jacket and apron — for Mr. Lang is now a grocer—he would wend his way to see me. He would not stay long. He knows the art of sick visiting. But what an inspiration!

To homes of sickness and trouble, with wonderful regularity and continuity, this dear old octogenarian will still go, and only the other day I accompanied him to the city as he went on business.

Mr. Lang has not been caught by the spirit of the times. He is regular at the weeknight preaching service and prayer meeting. When the night has been wild and stormy, and younger ones have failed to face the elements, his place has not been vacant. he has never had a holiday in his life: never has he travelled a hundred miles away from his home. Though hair is white, limbs feeble, and years many, we would like to see him stay much longer with us.

Simon was born in 1825 at Springfield, Gretna Green, Dumfries, to parents Simon Lang and Janet Gibson. He was baptised on 22 July 1825 at Graitney, Dumfries.