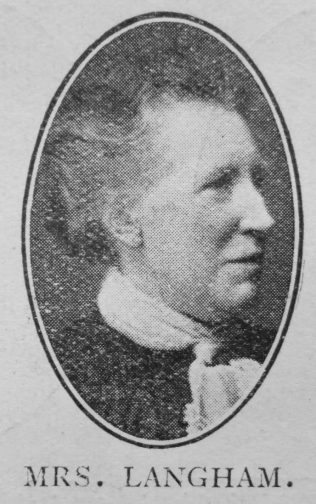 Beautiful is the story of Bessie Langham’s earthly life, which began at Luton April 27th, 1850, and closed at Tunstall, February 20th, 1910, just as the church bells were summoning God’s children to His feet. Childhood was the season when in her heart she found a home for God and became associated with our Church. From the first she faced heavenwards resolutely —but the Martha and the Mary spirit, devotion and service, were beautifully united in her. Not hers the piety that runs to waste in reverie and rapture, but rather that which expresses itself in practical activities.

An assistant teacher in a day school—she was also a much-loved teacher in the Sunday School and a worker in the Church in other regards. October 1st, 1873, found this bright-hearted, alert, and cultured lady wedded to the Rev. James P. Langham, a marriage truly idyllic, for she was her husband’s complement, and in addition to serving him in the home with a rare devotion, gave no little flavour, inspiration and assistance to him in his public ministry.

Genial, tactful, appreciative, and yet withal unobtrusive, not inconsiderable was her contribution to our Church. Happy was she in her children—all of whom have done exceeding well, and are an honour to their parents, while her cup was full to overflowing with gratitude when her son, Rev. S.A. Langham, became a minister. Hopes she entertained of doing further Church work as her family demands became fewer – but a dread disease that seized her years ago mocked so fond a dream. Never, however, did she become cynical or unsubmissive, her soul-fires burned with a bright glow until the last.

Her sick bed, with its blithe and beautiful spirit, was a miracle to the watchers. This life—home, politics, theology, the Centenary, the forthcoming Conference—held her with enthralling interest until the moment Heaven’s door opened. Easy for her was it to go home, for she lived-all her days in its neighbourhood. We thank God for a soul so choice—and we mingle our tears with the husband and family who have suffered such impoverishment by her translation—for we, too, have lost a friend we loved.

Bessie was born on 27 April 1850 at Luton, Bedfordshire, to parents Samuel, a (hat) blocker, and Elizabeth.