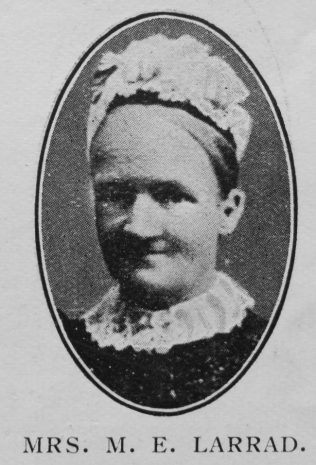 The sudden passing of Mrs. Larrad has caused sorrow to a wide circle of friends. She had reached the ripe age of 74 years. For well nigh sixty years she had been in the Church, and daring half a century a member of the Curzon Street Church. She was the daughter of the late Mrs. Phoebe Smith, the memory of whose saintliness and spiritual power is an imperishable tradition in Loughborough Circuit.

Converted in the old Swan Street Chapel, Loughborough, she became a Sunday School teacher and useful worker. Shortly after her marriage to Mr. C. Larrad, who survives her, our friends removed to Leicester and connected themselves with Curzon Street Church. They have been true friends of the cause. Mrs. Larrad’s sweetness of disposition, devoutness of spirit, and true Christian goodness have made her greatly beloved. At their golden wedding last April, opportunity was taken to give expression to the love and esteem entertained for them by their fellow members.

Mrs. Larrad had a seizure on Sunday, July 10th, which terminated fatally the same evening. She was interred July 14th, and the writer conducted a memorial service in Curzon Street Church the  following Sunday.

Mary was born on 15 September 1835 at Loughborough, Leicestershire, to parents George, a shoemaker, and Phoebe. She was baptised on 18 February 1836 at All Saints, Loughborough.