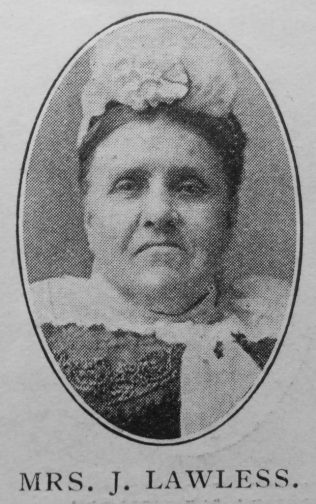 Transcription of obituary published in the Primitive Methodist Magazine by J. Bradley

Esther, wife of James Lawless, of St. Helens, Deedpoll member, passed away September 14th, 1909, having reached the age of 78 years, after an unbroken membership in our Church of 65 years.

Born at Broom Edge in Cheshire, when quite a girl she removed to Warrington, became a scholar in the Sunday School, and at the age of 14 consecrated her life to God. In those early days she was privileged to meet the venerable Hugh Bourne, and many of our early preachers,

In 1852 she married and came to live at St. Helens, joined our people, and through all the vicissitudes, toils, and sacrifices which have eventuated in the vigorous Church of the present, our sister cheerfully took her share. Her delight was to entertain the preachers, and many an interesting story could she tell of the early days. It is a fine witness to the value of her influence, the sincerity of her Christian character, that all the surviving members of her family are closely identified with our Church. To her husband she was a true helpmeet.

In her last illness she suffered much, but with fortitude and patience. Her confidence in her Saviour was strong and clear, and she passed away in the full assurance of faith.

Esther was born in 1831 at Broom Edge, Cheshire, to parents John, a shoemaker, and Mary.

Before her marriage Esther worked as a bobbin winder.