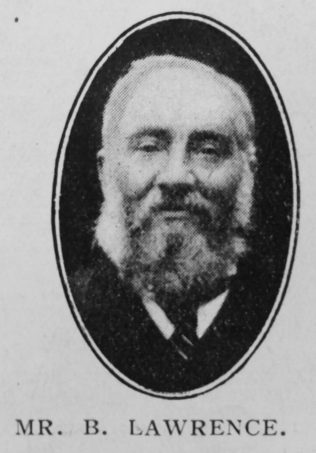 In the passing of Benjamin Lawrence, December 15th, 1911, aged seventy-five years, Victor Street Church, Walsall, lost one of its oldest and most respected members. One of the veterans and stalwarts of Primitive Methodism, he was converted while young. For nearly sixty years he was a local preacher, and was never known to neglect an appointment. His early life was spent in Birmingham. Fifty years ago he removed to Wolverhampton, and for eleven years laboured as local preacher and class leader at Monmore Green and Duke Street. It is nearly forty years since he became associated with Darlaston Circuit, first at Sleck, and of recent years at Victor Street, now of the Walsall Circuit.

During the long years of his life he travelled many thousands of miles to preach the gospel. When over seventy years of age he took his appointments regularly, was class leader, society steward, and treasurer. The duties of these offices he attended to with rare diligence and never-failing punctuality. He was a most excellent visitor, spending much of his time visiting the sick and looking after the absentees from the public services and class meeting. He was a generous-hearted man, ever ready to help, and he nobly supported the funds of the Church. His home was ever open, and one of the special delights of his life was to entertain the Lord’s servants. He was specially blest with a wife in fullest sympathy with all his Christian work, and his family joined him in all his noble efforts.

During the last two years of his life he was heavily afflicted. When the end came he was quite ready, and there passed from our midst an honoured servant of God, one who has left a noble record of self-sacrificing labour.

Benjamin was born in 1836 at Wolverhampton, Staffordshire, to parents Edward Lawrence, an edge tool maker and PM local preacher (1861), and Maria Mees. He was baptised on 28 March 1836 at St Peter, Wolverhampton.