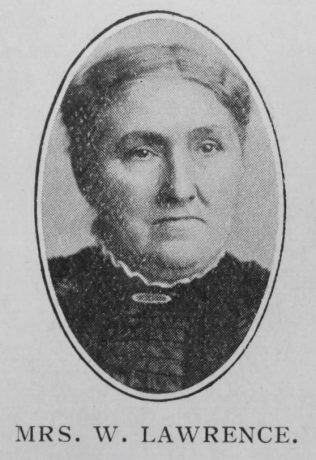 Transcription of obituary published in the Primitive Methodist Magazine by G.T.D. Pidsley

Rebecca Jane, the beloved wife of the Rev. W. Lawrence of Biddulph, passed to the “Homeland” on November 7th, 1911, after a brief but painful illness. She was the daughter of Daniel and Sarah Watkins, of Blackhill, in the parish of Cluddock, Herefordshire. Born December 28th, 1849, she was brought to a knowledge of the truth as it is in Jesus at the age of thirteen years at Lingen in the Leintwardine Circuit, and maintained a Christian confidence and consistency without wavering to the end.

She was united in marriage to the Rev. William Lawrence (who now mourns her loss) on March 24th, 1873. She has shared with her husband the duties and responsibilities of domestic life for thirty-eight and a half years. She was an ideal wife and mother, and a devout and earnest Christian worker in the Church, and was held in high esteem by all who knew her in the following Circuits: Birmingham II., Southwark, Kingston-on-Thames, Exmouth, Cheltenham, Macclesfield, Crewe, Talke, Halifax I. and II., and Biddulph. Our dear sister had a full share of domestic cares with the family of seven children. Two of her sons had pre-deceased her after having grown to manhood; Daniel George in 1900, at the age of twenty-two years, and Herbert Stanley in 1907, at the age of twenty-seven years. Daniel George, one of above sons, had been a devoted, earnest Christian worker in the cause of Christ, and Herbert Stanley died in the full triumph of the Christian Faith. Their departure was a great blow to their dear mother.

Her health began to fail in August last, but no one suspected the fatal nature of her affliction. After a special examination of her case, and when informed of the seriousness of the same, she said, “I expected this, but my future is safe. I have no fear or misgivings. My only regret,” she said, “is to leave my dear husband and family.” On Tuesday, Nov. 7th, after intense suffering, she calmly feel asleep in Jesus.

On the following Saturday her mortal remains were laid to rest in Biddulph churchyard. A large number of friends had gathered from the different parts of the Circuit and from adjoining Circuits, to pay their tribute of respect to the one deceased, and to show their sympathy with the family. The following ministers took part in the service held in the Primitive Methodist Church at Biddulph, and at the grave:—Revs. A. Williamson, J. Teece, W.B. Bache, W.E. Webley, and G.T. D. Pidsley. The Rev. E. Wheeldon, Vicar of Biddulph Moor, manifested his sympathy by attending the funeral and by offering the concluding prayer at the graveside. A memorial service was held in our Church at Biddulph on Sunday, Dec. 3rd, conducted by the writer, when a large audience was present. The choir rendered in beautiful style the piece, “O rest in the Lord.”

Rebecca was born on 28 December 1849, at Cluddock, Herefordshire, to parents Daniel, who worked the land, and Sarah.