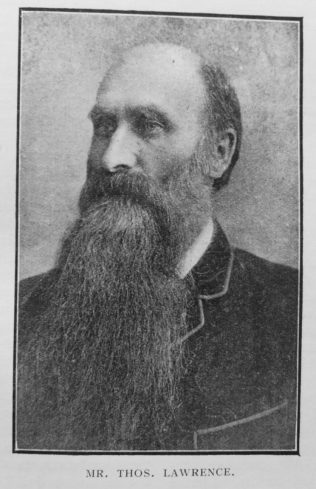 Transcription of article published in the Primitive Methodist Magazine by Rev. Joseph Odell

“But a prophet of the Lord was there, whose name was Oded.”

SUCH a prophet of the Lord has just passed from us whose name was Thomas Lawrence. Nor does the long period intervening between the hero of Samaria and our hero of Leicester, just ascended, make inappropriate the descriptions in character and conquest they were brothers — “Prophets of the Lord.” Their true philanthropy, sterling patriotism, fidelity to eternal principles, their vision and victory in the municipal and national crises of dissimilar periods are identical. That living picture of Oded reveals exactly the force of both lives. Both appear at their best as citizen prophets, and both were qualified by one rare possession for their life work. That possession, giving conspicuous personality, an immensely richer thing and rarer than all else, was presence of heart. That gave prominent greatness to Thomas Lawrence. ‘‘It is the heart and not the brain that to the highest doth attain.’’ Many among his friends and others opposed to him on principle, felt this in his company; even when they could not quite discover the secret. His heart was in all he did for God and men!

This presence of heart GOD gave him at Ratby, Leicestershire, the home of his youth; he  was there nursed into its possession. It was not by fatherhood this endowment came, although his father was a mighty man in prayer and often masterful in his methods. But his mother nursed for God. None who ever saw that smile of hers and heard the sweet speech she uttered can forget “Mother Lawrence — Sister of the People” — e’er that fine title was popular; everybody’s friend she seemed, class leader to hosts, sick visitor always, and yet through so many years a widow with five young children to bring up. It was then her eldest boy — ‘‘My Thomas” she called him—became her gallant knight and nobly did a father’s part and more, for all that little home. In the honour he gave to mothers, sisters, brothers—his youthful protection of them, provision for them, he found his heart; nor did he ever lose it.

Changed, consecrated, chastened oft in those stern days of his early Leicester life, sore put to it by domestic burdens and business pressures, he wonderfully triumphed. It was just then, and through this necessity, that he missed the Ministry of our Church, but he was surely better as a man than he might have ever been as a minister. He kept his heart. Thus he served. Nothing less could satisfy him. Even business must contribute to that. This principle accounted for much. He might have been rich, but he was a Nazarite prophet. He might have been in public positions, but Baal could not slay the Nazarite. In those days he could and did preach with blunt integrity and white honour. The prophet-preacher ever! His politics, peace views,  philanthropies, freedom of Church and State, were interwoven into his prophetic message. It could not be otherwise—himself—the very man was there.

To higher service did he mount. A Class Leader! of course. I know that so well. Blessed be the God of Class Meetings! Two of my sons were among the boys of his catechumen class. Many things they tell of his man-making counsels and patient treatment. He wrapped his fervent faith around them.

But of all his service, his invariable ministry of so many years as a faithful, painstaking, self-denying local preacher bears the palm. He magnified his order by mighty deeds. In his own home Circuit chiefly and with rare consistency for fifty years he preached his best and brightest and gave all he possessed of revelation, faith, knowledge and success. That grand Leicester Second Circuit bears the impress of his life. His was not preaching by mere declamation. Always philosophic and profound, it was yet penetrative and had perfect order and polished precision. God was in the preacher, and his hearers felt the sermon. Being experimental, the message produced always practical results. I heard some of his mid-life sermons and read many of those preached in later days. The enrichment of his life by years and trials gave tenderness and enhanced worth to his utterances. There were years of bitterness which by the graciousness of God he made years of strength and sweetness to his hearers in the town and village pulpits of his beloved circuit. His heavy trials he told to very few. Though stricken, he was content, because God beheld. His bereavements also, to all who knew him, seemed overwhelming: his loss of Arthur, that charming cousin; then Caleb, his beautiful and loving brother and business helper. In advancing years, when time, the sweet healer, seemed growing kinder, came that crushing blow, the death of his only son, “My Tom.” The suddenness of the blow left him distraught. This son of happier days and high ambition had been his hope. Tom had found his sphere, that of an artist in Fifth Avenue, New York, where I saw him last at work in his studio, so busy with art, home and love. Martyr to the brush and easel, he succumbed to double pneumonia. Poor heart-rent Thomas Lawrence !

After this it was an aged prophet that survived. Thomas Lawrence, so bereaved, became by that stronger faith that endures ‘‘seeing the invisible,’’ the man who could preach right out from the eternal. He did so preach. Hosts of people around the circuit say so. Many will never forget those later sermons flowing from the scarred heart, seasoned and sweetened by the living Christ. This preaching became everything to him,—his whole life. On the platform or in the pulpit he had always given speeches and sermons full of thought and cumulative in appeal; but from his sorrow to the end he literally burned with passion. Not one who heard that all-conquering speech in Jubilee Chapel, Scarborough, at the Conference of 1905 will question this or forget either the prophet or his ‘‘burden of the word of the Lord.’’

One of my friend’s great texts was, “If the foundations be destroyed, what can the righteous do?’’ With him to be bedded right was everything. The “fundamentals’’ were of immeasurable importance. He could not tolerate any trifling with these. But his religion was more than creed—it was life, love. He was not afraid of true emotion; he cultivated it. His mastery of music was a rare gift, and heart and voice were given to it. But music with him must be used divinely. He held that ‘‘the immovable basis of all religion is in the emotional nature of man.’’ He gladly yielded to this essential principle and lived in the fervour of holy love. Hence his fine enthusiasm for Missions, and long continuance and fidelity in office. With all true ministers he was deeply in sympathy. Even his slight touches of criticism and correction were always gracious. For bitter fault-finding about our ministers he had neither use nor patience.

Thus the life of this man of God was lived. His very last days were rounded off by service at Ratby, preaching last where he preached first; but as he wrote to me the Monday following, “my pain and agony were so intense I could not go through it again.” The end was near. He was comforted by the visits and tender ministries of loved ones; also by ministerial love and care. That dear old comrade in chivalrous service—Elijah Jennings—saw him morning by morning. These heroic souls had toiled together in the missioning and making of the Circuit, and it was both fitting and beautiful that “one should see the other off.’’ Reunion cannot long be delayed.

Now it would be an impertinence to hint that such a life had not some blemishes. There were faults and blunders to be sure. Thomas Lawrence knew and mourned them deeply. But great outstanding beauties of character are not destroyed by an accretion here or there on the imperishable base. The substantial monumental man remains for us—the shining mark indeed. Nor do we “parrot” out “We ne’er shall see his like again.” We shall, and better also. Of all churches, ours, by its very conception as well as constitution, is ever needing better men and must have them. We have no fondness for that pretty fiction, much in use in the eulogy of great men, that as they were made “the mould was broken and thrown away.’’ Thomas Lawrence was aiming always at the better man to come. A glance around the Quarterly Meeting at Hinckley Road, Leicester, would supply the proof. A host of eager men and young stand there and pledge and pray. They will not forget those statesmanlike plans, appeals, addresses, some of them in tone and quality worthy of an empire builder. Still the prophets come, and come they will, until “all the Lord’s people are prophets” and He puts His Spirit upon all His servants.

Thomas was born in the summer of 1843 at Leicester, Leicestershire, to parents Thomas Lawrence, a grocer (1851) and framework knitter (1861), and Alice Weston.