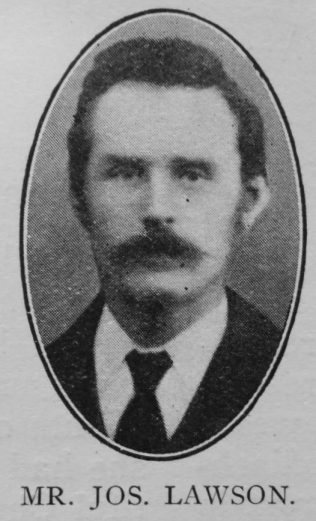 Mr. Joseph Lawson was laid to rest on January 21st, 1911, amid the most touching proofs of sorrow and sympathy. The victim of a terrible mining accident the Wednesday preceding, he was taken to the Newcastle Infirmary but nothing could be done to save him. The sad calamity cast a gloom over Washington and the whole district. A service was held in our church there, at which many hundreds of persons were present. Rev. A. Ryder conducted. The writer, in his address, recalled the outstanding qualities of his friend, recounting especially their experiences at Langley Moor in the Spennymoor and Brandon Circuits.

Joseph Lawson’s early years were spent at Page Bank, near Spennymoor, When quite a boy he was won to God with thirty others in a great revival in which Mr. Stephenson Stobbs and Mr. John Newman assisted. Afterwards he went out to preach with Mr. Stobbs. At Page Bank he became a Sunday School teacher, and by-and-bye the Superintendent. He was the Choir-master, and also the Secretary of the trustees.

Once, for a week, he conducted revival meetings at Page Bank. In later years he was in business at Langley Moor, near Durham. He was one of the stalwarts who founded the Brandon Circuit. His last years were spent at New Washington. He had returned to the dreaded pit and unhappily came to his death in its workings.

He was a most lovable man, the soul of kindness and profoundly religious. He had a most wonderful gift of speech. He was generous to the last degree. The writer can never forget the brotherliness of their intercourse. For the widow we feel the utmost sympathy. We pray for her and for the members of her family. The future will be bright for them if they follow in his steps.

Joseph was born abt1861 at South Church, Co. Durham, to parents Joseph, a colliery weigh man (1881) and Agnes.

Joseph died on 17 January 1911 at Newcastle upon Tyne, Northumberland, following an accident at Usworth Colliery, Co. Durham where he was working as a stoneman.