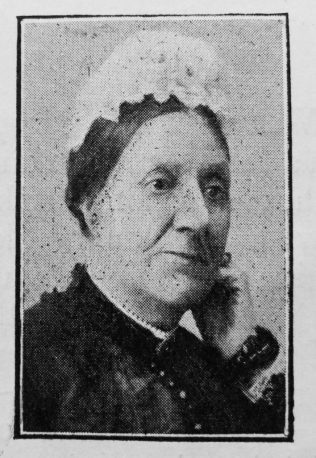 Transcription of Obituary in the Primitive Methodist Magazine by Charles Harrison

Born in Clovelly, 1816, Mrs. Ann Lawton was the daughter of Mr. Robert Squance, Swansea. At her home many of our early ministers were welcomed. At twenty-two she was married to Rev. Boaz Tripp. As a minister’s wife she was an invaluable helper, and especially successful in raising money for the reduction of chapel debts.

In 1859 she was left a widow with five children, one of whom became a minister in our Church, the late Rev. E.R. Tripp, and the youngest daughter became the wife of Rev. Charles Harrison.

Loyal to her own church she was ever ready to serve its interests. Her home was a real Bethany for preachers, lay and itinerant. Her heart went out to young men, and she encouraged them in every good word and work.

Her joy was complete when leading penitents to the Saviour. During the last year or two her wonderful constitution began to show signs of change. Children and grandchildren did their utmost for her. Serenely she entered “the valley” with eyes fixed on the Homeland, and as if to clasp the hand of another she raised her own. Her face became illumined with a heavenly smile, and so she was translated.

Rev. James Travis writes: “I remember her kindness to ministers of God, and her generous support of the cause of Christ when I was a ‘supply’ in the Isle of Man forty-eight years ago. She had a great power in prayer, and was intensely loyal to our Church. And you have the comfort that she now sees the Christ whom she served for more than half a century.”

Rev. Thomas Meakin writes: “She was a good woman, an earnest worker, a loyal Primitive Methodist. I liked to hear her pray. She knew the way into the inner sanctuary, and indeed seemed to dwell there.”

She died in June 1906 in the Birkenhead Registration District, Cheshire.