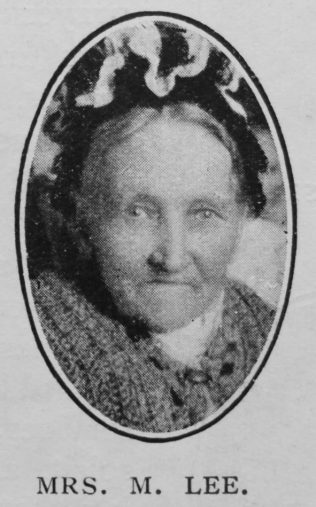 Transcription of obituary published in the Primitive Methodist Magazine by T. Pearson Ellis

Mrs. Mary Lee, of Haltwhistle, entered into rest on February 21st, 1912. Her life was not only long—for she had entered upon her eighty-sixth year—but rich in service. For over sixty years she had been a member of our Church at Haltwhistle, and to the last preserved her interest in its affairs. Her kindliness and warm, helpful sympathy endeared her to many hearts. She made goodness attractive by her loving and tender ministries. She had so cultivated the art of appreciation that to the last she was amazed at the goodness of God.

And yet she had had her share of clouded days. Her husband, Robert Lee, predeceased her by fifteen years, and she had known other sorrows, but these never soured her spirit. Though old in years she never became peevish or complaining, so that it was ever a joy to visit her, and one always came away from her presence feeling that they had received far more than they had given. And how intense her love for the best things. She lived long it is true, but she lived well, nay, she lived grandly, and there are many lives who are much richer to-day because they have known “Granny Lee.”

It is a joy to know that our dear sister was so well cared for by her family. She was fortunate in her family; she loved them well; but they well repaid her. To the last she had the devoted attention of her only unmarried daughter, Miss S.A. Lee, and to her the loss of the mother will be greatest. But our sister had earned her rest, and we must be grateful for her faithful life. We interred her in the Haltwhistle churchyard on February 24th, when a large company attended to pay their respect to the memory of a good woman.

Mary was born abt1827 at Knaresdale, Northumberland, to mother, Jane. She was baptised on 17 February 1828 at Knaresdale.

Before her marriage Mary worked as a farm servant (1841).