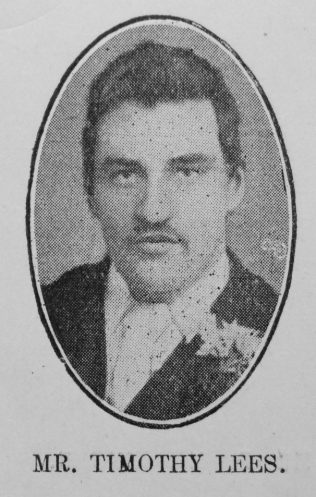 Transcription of Obituary published in the Primitive Methodist Magazine by M.P. Pearce

Timothy Lees was a fine type of man, strong, brave, and true. He was taken in the strength of his manhood at the early age of thirty-six years, at a time when he was most needed by his family and Church.

“God hath His mysteries of grace, ways that we cannot tell,
He hides them deep, like the hidden sleep of him He loves go well.”

He was born at Burntwood, near Lichfield, and at the age of twenty, gave himself to the service of Jesus Christ. He was called to the ministry of the Gospel a few months after his conversion, and proved himself a good preacher.

His preaching of the evangel was earnest and intelligent.

As a member of the Aston Manor Fire Brigade, he was trusted and greatly respected, and was given an official fireman’s funeral. The funeral was most impressive and attended by several hundreds of people.

The Rev. M.P. Pearce paid the following tribute to his friend:
“I knew Timothy Lees as a preacher and a man. He was a man of honour and integrity, a preacher whose candid sincerity adorned the message he spoke. One of his greatest sorrows was when he was forcibly withdrawn from preaching in order to fulfil the conditions of his employment. But he learned in the restraint of his powers what he could not have learned in their exercise. He always impressed me, as one possessing that quiet strength, which, when he knew the inevitable, faced it bravely. But while he had to relinquish the work he loved, yet he stood at the outpost of duty until the day of his death.

We should sound a false note and belie our brother’s profession as a preacher and a fireman, if we said that he feared death.

A preacher of the quenchless and undying hope for humanity, he drew the fangs of death, and facing it daily in the pursuit of his calling, he answered ‘The Final Call’ of his Heavenly Captain.

The vase of clay which held the precious ointment of a noble character has been broken, broken—that the fragrance of his life may be distilled as precious memories in many a heart.”

Our brother is deeply mourned by a wife and two children. To his sorrowing parents, brothers, and sisters, we extend our heartfelt sympathy. Mr. Lees senior is one of our ablest preachers in the Midlands, who has given to our ministry two able and devoted ministers of our Church, the Rev. David Lees, of Cross Keys, and the Rev. Ambrose Lees, of Shrewsbury.

Timothy was born in the summer of 1873 at Burntwood, Staffordshire, to parents David Samuel Lees, a coal miner, and Mary.

Timothy died in the spring of 1909 at Birmingham, Warwickshire.

Harriet was a greengrocer after Timothy died (1911).