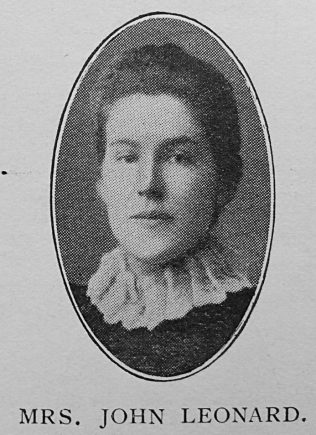 Transcription of obituary published in the Primitive Methodist Magazine by S.E. Mowforth

It is with the deepest regret that the Soham Church and Circuit has to report the passing of one of its choicest and rarest spirits to the Homeland. It was in the evening of August 5th that the sad news was brought to us, coming as a great shock to the many who had hoped that the gravest and worst fears were then almost passed, and that the beloved worker, who, in her quiet, unostentatious way, had won an entrance in the hearts of so many, was yet to be spared to labour in our midst. But the Master Workman had other tasks for her, and in the Greater Church of the Eternal City she must serve.

She was the only daughter of Mr. and Mrs. C. Youngs, of East Dereham, and was from the earliest days a worker there, but in later years she removed to our Church at Soham, and for five years held positions as organist, Sunday School Teacher, and Christian Endeavourer. It was in the fulfilling of these duties that the silent and gracious influence of Mrs. Leonard’s life was felt, causing those who met her most intimately, to feel that such influence would be an abiding one. About two years ago she married Mr. John Leonard, a lifelong worker of the same Church.

The funeral service, conducted by Rev. P. A. Evans, at which large numbers assembled to pay their last tribute of love, showed how high a place she had won in their hearts by her beautiful Christian life.

From the Choir, Trustees and Sunday School wreaths were sent, and the deepest sympathy was felt for the husband and the little daughter, but a few weeks old, left behind. To the memory of such a life, one places a wreath of love which shall be evergreen. Truly “She hath done what she could,” and “His servants shall see His face.” In the light of His countenance, she still serves. The worker has passed away, but the work abides. It will live in the lives touched to fine issues and will be a memorial of her.

Amelia was born in late 1871 at East Dereham, Norfolk, to parents Charles Youngs, a coal merchant (1881), and Mary Ann Creed.