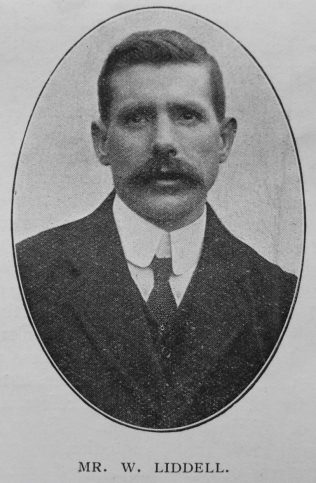 Transcription of Article published in the Primitive Methodist Magazine

No one who for the first time sees William Liddell, of Shotton Colliery, Thornley Circuit, will suspect that a few years ago he was a drunkard, gambler, atheist, and utterly regardless of wife, children, home, and all that makes life noble and precious. Smartly built, of intelligent eye, smiling countenance, and thoroughly enthusiastic in God’s cause, he strikes one as having been connected with the Church all his life. But such is not the case. It is not five years ago since he entered the village of Shotton, hungry, dirty, friendless—a tramp. The change between then and now is so great that one is constrained to exclaim, “What hath God wrought!” His story is so wonderful that it ought to be told. Here it is:

“I came into the village of Shotton in October, 1904, a tramp—one who was reaping a bitter harvest of sin. My own could not acknowledge me, so low had I sunk. I had drunk away my home, and left my wife and family depending upon the charity of others. I had been robbed by the devil of love for my wife and children, and they came to fear rather than love me. Poor things! there was reason for it. How could they even respect me when I had been a brute to them. I often regret it, and I am filled with thanksgiving that they were not absolutely turned against me. I had nothing except what I stood in, not even a character, sin had gone with all. Verily the wages of sin is death, death to all that is manly, good, noble. Bitter experience taught me this, for I would stick at nothing to satisfy my craving for drink.

“At this time I was 29 years of age. I succeeded in obtaining work at the colliery; but although there was a member of my own family living here, I had to sleep in the ‘stoke-hole’ of the colliery boilers, as I was too bad to receive a night’s lodgings. This somewhat startled me and caused me to reflect upon my wickedness. My wife did not know where I was, and when I received my wages I wrote her to come to me. She came. I often marvel at her love and patience. I had for eight years made her life hell upon earth, had left her homeless, solely that I might satisfy my selfish craving; and yet when I sent for her, she at once came to me to share my weal or woe, though there was the prospect of nothing but woe. I took her to the house given me by virtue of my employment. It was empty except for a box. No furniture, and no means of purchasing any. How dismal! But I promised to lead a better life. I saw how foolishly wicked I had been, and felt remorse. But, alas for promises made in dependence upon our own strength. I was soon back to my old ways and became almost as bad as ever.

Easter, 1905, I went away intending to spend the holidays with some friends, but I never reached my destination, as I got drunk, and becoming quarrelsome I soon had a couple of fights. After the second one I was apprehended by the police, and about to be locked up, but after promising to return home I was liberated. i set off home next morning, and when on a lonely part of the road, I was arrested by a voice which said: ‘Will,’ (my father used to call me Will), what would your father and mother think of their son now, if they should see him this Sunday morning in such a plight—no collar, covered with mud and blood, and steeped in drink.’ I dared scarcely look round lest I should see some visitant from another world. A vision of my saintly mother came before my mind, and I remembered my father’s counsel. They were both dead, but there they were in my memory as if they were really standing before me. My heart was sore, and my conscience was terribly severe in its accusations against me. I vowed if I could get over Easter Monday I would never touch strong drink again. That vow I believe was heard in heaven; and it seemed to be heard somewhere else for almost immediately I had an experience as if some-one was laughing at me. Was it that some fiend heard my vow and mocked me, knowing I had often, said I would cease drinking? I could not tell, and I trembled as I thought of that laughter. I thank God l kept that vow. For some time I was quite satisfied with what I had done, and did not think that a greater change was necessary. I was. teetotal,  but I still gambled. I have learned since how foolish I was, and what risk I was running, because gambling leads to poverty, and kills a happy home.

About three months after this, special evangelistic services were held in the Primitive Methodist Chapel. I went to some of the meetings, but only with the idea of ridicule. Though I had been brought up in a Primitive Methodist Sabbath School, I had not been in a place of worship for years, and was a pronounced sceptic. I had several arguments with the brethren, but nothing they said made any impression upon me except that they ‘would pray. for me.’ Their arguments, I thought, were easily demolished, and as they could not satisfactorily answer my positions, I remained unconvinced; but when they said they ‘would pray for me,’ I felt puzzled and uneasy. This was in June, 1905. On the night of the 15th I was in the bedroom where my two boys were sleeping, and as I passed their bed and looked at them the Spirit of God spoke to me. I was asked: ‘How are you shaping these two lives?’ ‘What answer can you give God when asked about them?’ I went to bed, but could not sleep. Those two questions had placed a load upon my heart that I could not remove, and so set my brain on fire that my torture was almost unbearable. My wife soon noticed my restlessness, and asked what was the matter with me. I told her that someone was praying for me. I could feel his prayer, and I trembled again.

Next day was Friday, the anniversary of our wedding, but I was in no frame of mind for rejoicing. Indeed I was in a state of torture, yet I would not yield to the strivings for a better life. I rather opposed them, and to rid myself of them I went to the ‘bookmaker’ and made a bet that certain horses would win. One of them won. Its name was Nirvana, which, as I thought about it, became full of significance to me. The burden of my sin was weighing me to the ground, and that name made me ask if there was deliverance or repose for me. At night I met some companions who had been converted during the week. Several of us, including the missioners, went to a friend’s house for supper. Not a word was said to me about my soul, and I was so weary and heavy laden. At a quarter to twelve we went out for a walk. The night was glorious, and under other conditions I should have enjoyed it. Little did I think as we set off that it would become the most memorable night in my life. But so God works. We had not gone many yards when one of the missioners asked me if I was married. I answered in the affirmative. He then asked me how many children I had. In an instant all the thoughts and scenes I had had during the long weary hours of the previous night flashed across my mind. The Spirit of God took hold of me, and if the friends had not caught me and held me up I should have fallen down upon the road. Oh that great burden of sin! I saw myself as the blackest sinner outside of hell, but glory to God I found an Almighty Saviour, and there on the turnpike I gave all that I ever was and all that I ever will be to Him. My first prayer was that He would take my life and let it be ever only all for Him.

And to those who cannot believe in the new birth, let me say, as hundreds who know me do, that by pouring out my all to Him, He has blessed me with His fulness. There has never been a greater upheaval in the soul of any man than in mine—a real spiritual earthquake. Old things have passed away; all things have become new.

“My boy, who at one time would have run away from me if he had seen me even half a mile off, now says he has the best father in the world; and my wife, who dreaded my coming into the house, now looks for the time with joy and gladness. I was a drunkard who had lost his will, a blasphemer, a gambler, a cheat, and wife-beater, but now I am a child of God, and therefore a sober, quiet, loving husband. From a self-determined man, salvation has made me Christ determined. All this I owe to Jesus, and He grows more precious to me day by day.”

God is helping William Liddell, and we are glad to say he is trying to help himself. He has satisfactorily passed his examination for the preacher’s plan, and is now an acceptable local preacher. Occasionally infidels and  blasphemers have jeered at religion in his presence, but they soon discovered they had made a mistake, as he would ask a few questions they could not answer, and relate an experience for which they had no explanation. His life is a remarkable witness to the power of the Cross. He is indeed a living epistle, known and read of all men.

He married Isabella Bird (1876-1961) in the spring of 1897 in the Sedgefield Registration District, Co. Durham. Census returns identify four of five children.