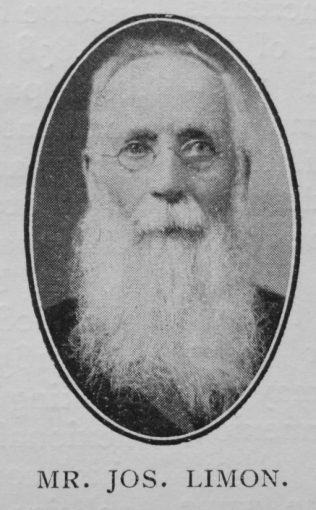 Transcription of obituary published in the Primitive Methodist Magazine by W.H.

Mr. Joseph Limon, of Withernsea, was a man whose life adorned his profession. He was born at Teelby, in the Market Rasen Circuit, August 26th, 1831, and in due course he learned the trade of his father as builder. When a little over twenty years of age he removed to Patrington, and has been there and at Withernsea ever since. He married Miss Pickering, who has been to him a true helpmeet. About two years ago they celebrated their golden wedding, when numerous congratulations were sent to them.

For many years Mr. Limon has had a prosperous drapery business, which is now carried on by his youngest son, Mr. Robert Limon. In the prime of life he consecrated himself to Christ and became a member of Society, and has given yeoman service to the Church.

For years he was a most acceptable local preacher, Sunday School Superintendent, Class Leader, Circuit Steward, and Member of District Committees, and was honoured by being sent as Delegate to District Meeting and Conference. His family consists of two sons and four daughters, one the wife of Rev. F. Holmes, of Southport. As father, he was kind and affectionate, as a citizen he was respected, and a friend to be valued.

For four years he has been an invalid, and has borne his sufferings with resignations, and on March 14th peacefully passed to the land beyond the shadows. The funeral was largely attended, and on Sunday, the 19th, a memorial service was conducted by Rev. W.T. Coles, in the presence of a large and sympathetic audience. For the widow and family we pray for the consolations of the Gospel of Christ. May they find comfort in the memory of a faithful and devotive life, and inspiration for service in days to come.

He married Mary Jane Pickering (1837-1914) in the summer of 1859 in the Caister Registration District, Lincolnshire. Census returns identify six of nine children.