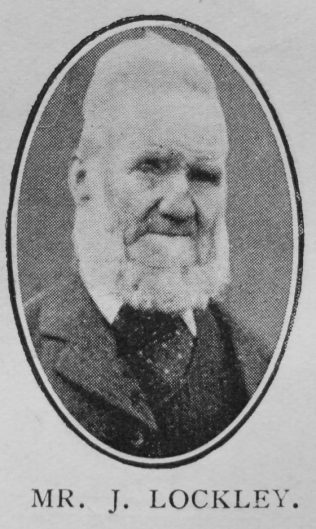 On the 8th February, 1910, our Bishop’s Castle Church sustained a great loss by the decease of Mr. James Lockley, who had been a member for forty-three years. Our esteemed friend had scarcely known a day’s illness during the sixtynine years of his life until he took to his bed a fortnight before his death. Brother Lockley was one of that numerous band of faithful toilers who are ‘‘content to fill a little space, if Christ be glorified.”

Our friend was a Trustee of Bishop’s Castle Chapel, a member of the choir, and the Assistant Superintendent of the Sunday School, which latter post he had occupied for over twenty-five years. In all these spheres of service he laboured faithfully and well. Perhaps the Sunday School lay nearest to his heart. He loved the children, and they repaid his love with a tender reverence.

If the best sermon is a consistent Christian life, then Brother Lockley, though not on the plan, was a powerful preacher. When he lay dead, it was gratifying to hear worldly men speaking of him with unfeigned respect. Said one who bore no special love to Methodism or its adherents, “if there is a Heaven, James Lockley has gone to it.’’

With every token of respect we laid our friend’s body to rest in Bishop’s Castle Churchyard. His Sunday School class reverently followed the bier, and an exceptionally large congregation gathered spontaneously to bear testimony to the worth of the departed one. An even larger company crowded our Bishop’s Castle Church on the following Sunday evening, when Alderman Pugh paid a fitting tribute to the memory of our sainted brother.

Mr. Lockley leaves a widow and one daughter, for whom deep sympathy is felt. He also leaves an imperishable record of fidelity to Christ. May the Lord raise up many more like unto him!

James was born abt1841 at Bishop’s Castle, Shropshire, to parents William Lockley, a stone mason (1841), and Martha Hartshorn.

He married Jane Pugh (1844-1914) in the spring of 1865 in the Clun Registration District, Shropshire. Census returns identify two children.