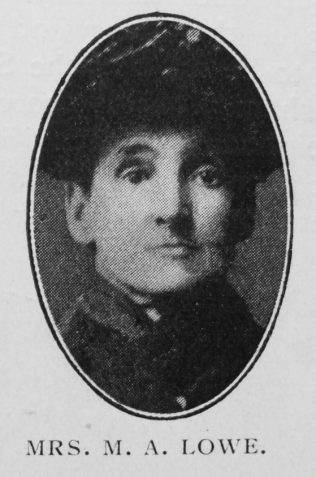 In the passing of Mrs. Lowe our St. Helens Circuit Church loses a loyal and devoted member. Hers was a life-long devotion, which knew no abatement, even when in great suffering. In Sunday School, as a missionary collector, and in varied labours of love she served faithfully. Her place in the sanctuary she held sacred, and was perhaps never absent when physically possible for her to attend. As God gave her children they were taught by example and precept to love the courts of the Lord’s house and to prize its fellowship. To her home ministers and local preachers were always welcome.

She was born at Billinge, February 18th, 1865, and entered into rest, July 12th, 1912. She was interred in the parish graveyard July 15th, by the Rev. B. Fell, who no conducted an impressive service in the Chapel, Billinge, and in which Mr. Peter Wright and Mr. J.R. Taylor took part.

We commend to God her husband, two sons and three daughters who mourn her loss.

Mary was born  on 18 February 1865 at Billinge, Lancashire, to parents Thomas Heaton, a coal miner, and Alice Baite.