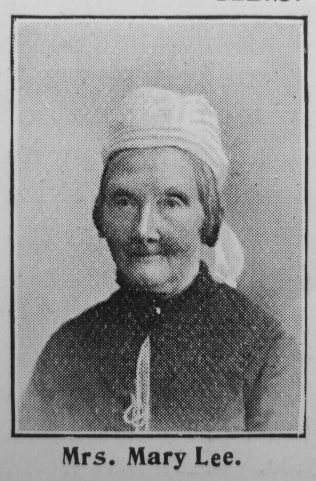 Transcription of Obituary In the Primitive Methodist Magazine by Thomas McKenzie

Mary Lee, who passed to her rest July 30th, 1899, in her eighty-second year, was born March 29th, 1817, at Thoroton, in the Bottesford Circuit. In early life she attended a mission service conducted by Rev. W. Worsnop; the subject of the discourse was “The Righteous Judgments of God,” She was deeply convicted of sin, which led to her conversion. In the year 1835 Providence removed her to Great Gonerby. There being no Primitive Methodist cause in the village, she attended the Wesleyan Chapel. In 1837 a Primitive Methodist Society was formed and services conducted in an old barn; our sister became identified with it, and for many years she was a class leader of great power, and of very much service to the Christian experience of others. She was a most ardent lover of the means of grace; in speaking of them she said: “l have need of the light and flighty; the preaching, service, class, and prayer meetings satisfy my soul’s cravings.” The camp meeting, love-feast, and watch-night service were always seasons of spiritual profit to her. Her reading was mainly of a devotional nature. She was a diligent student of the Bible, committing much of it to memory; its rich promises were to her messages full of meaning. She would say “that she always found it best to fight the devil on her knees with her finger placed on some passage of scripture.” The Connexional magazines were always taken and eagerly read. The biography of holy men and women was a source of inspiration. “Finney’s Life and Lectures ” was a book she loved. Her association with the early preachers was always a delight; the names of Revs. P. Dakin, R. Parks, Dr. Antliff, W. Carthy, and many others were specially dear to her.

She was most loyal to her religious convictions, and very jealous for the honour and prosperity of the Primitive Methodist Connexion. Her principles were often put to the test. Her husband being the village school-master, he had to attend the Church Of England service. The managers of the school (none of whom are now living) requested Mrs. Lee to attend the church and sever her connection with our society. A fortnight was given for her to decide the matter; her reply was. “I do not need a fortnight to consider the matter; I am prepared to be thrown out on the street with a crust of bread rather than sacrifice my principles.” The spell of persecution was broken, and her enemies were put to confusion.

This good “Mother in Israel” was a great believer in the power of prayer. Many remarkable answers to her prayers might be recorded. There was one respecting the rent of the preaching place: whilst she was praying she felt assured that the money would come. Soon after her husband came into the house, opened his hand and there was the amount required, which had been unexpectedly given him for the cause. He said, “I know there has been some prayer about this.”

Her holy life and example had a marked influence on the lives of her children; it is mainly owing to this that all her family who survive her are members of some Christian church. Her usual gifts to them upon leaving home were a Bible and a bound copy of the Primitive Methodist Magazine. Our dear friend comprehended somewhat the mystery of suffering: though her physical weakness was great and her suffering at times most acute, she was both patient and submissive. She prayed that every day in the furnace of her affliction her soul might be purified the more. She knew something, too, of those holy heights of perfect bliss and confidence which God gives to His saints. One Sunday morning during her illness she told her family that she had got a “new experience,” and now understood what “perfect peace” meant. As the end of her mortal race drew near, she expressed a wish to see a few friends, including her esteemed minister. In bidding them adieu she exhorted them to be faithful; then one of her favourite hymns was sung, “O for a heart to praise my God,” she herself starting the tune. Her room that day was indeed the very portals of heaven. It being impossible for her to see the whole of the Society, she requested that the Society should sing at her grave the hymn “Farewell, dear friends,” and that they were to accept that as a mutual “farewell.” Looking round upon her family she said, “I commit all I have, my soul, my children, and the church, unto the Lord.”

Her last few days on earth were occupied in meditation and prayer; especially was this so on the Sunday when her spirit passed away. In the afternoon the singing of the Society in procession to the camp meeting attracted her attention. The window of her room was opened so that the strains of Zion’s song might be heard; and as we sang “We are marching to Zion,” she, with a smile of quiet and calm emphasis, exclaimed, “Bless the Lord! ” In the quiet evening hour of that sacred Sabbath her end came; it was as she had prayed it might be – peaceful. She had prayed that if unable to speak she might be permitted to give some token of victory; so it was. After waving her hand feebly three times, her soul passed into eternal rest.

Those who knew our dear friend the longest, loved her most. Her life was one lovely in disposition, thought and affection. No one could be long in her company without feeling better; her very face was an inspiration, her kindness was as the touch of an angel’s hand, her prayers were as electric sparks that thrilled the hearts of those about her, and pierced the heavens until they reached the throne eternal. Her long service for Christ and His Church has been not only true and constant, but also full of joy; the Saviour’s joy remained in her, her joy was full, and no man could take it away. The dews of God’s grace and love bathed her soul and kept it ever young and beautiful. Her duty in the home, in the church, and as a neighbour, has been faithfully done. For upwards of sixty years residing in Great Gonerby, her influence for good has been exerted upon succeeding generations, and she has enjoyed the honour which her ripe Christian character called for. It is with continued esteem and affection her good name will be cherished for many years to come, and will be as “ointment poured forth.”

Mary was baptised on 3 March 1817 at Thoroton, Nottinghamshire. Her parents were Joseph, a farmer, and Mary.

She married James Lee (1805-1889) in the summer of 1837 at Great Gonerby, Lincolnshire. He was a widower, with a son, James, from his previous marriage. Census returns identify eleven children.