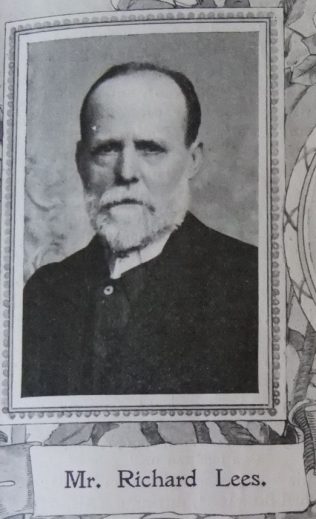 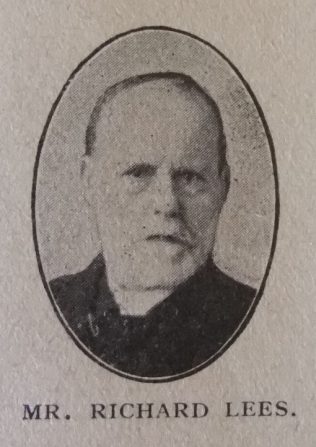 Grit and grace have made Richard Lees, Darlaston, one of the foremost men of his circuit and district. His keen discernment, sound judgement, caution, tact and patience have made him a wise councillor to the ministers and to the West Midlands District. Every duty is regarded as a sacred trust; to him the call of the Church is the call of God. His class members count him a personal friend, and the Sunday scholars look up to him as a father. For many years a local preacher, no one is more welcome in the pulpits of his own and adjacent circuits than he; while candidates for the plan gather at his house week by week for instruction in the doctrines of our church. But hard work, enterprise and faith in God he has acquired a competence; but he is not rich save in the confidence and love of his family, the strength and beauty of his character, and the esteem of his fellow townsmen.

Richard was born in 1841 at Darlaston to parents James and Lydia. James was an iron moulder.

Richard worked as an iron moulder for many years before becoming a school attendance officer.

Richard was a local preacher for fifty-seven years and served as circuit steward for fourteen years.

His obituary records that he had the gift of fluent speech, and it was well used in the pulpit, on the platforms, and in open-air missions. He was well known in the neighbourhood as a sick visitor.

At the time of his death Richard was a member of the Walsall Board of Guardians.