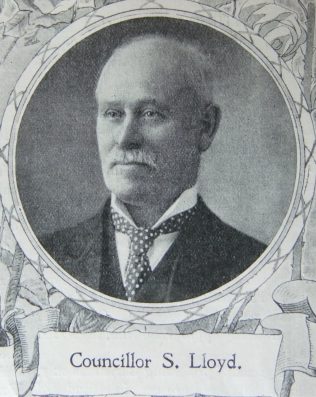 The Senior Circuit Steward of Oswestry has been a member in the old circuit for forty-eight, a class leader for forty-two, and a Local Preacher for forty years. He has held nearly every office his Church and Circuit can bestow; has been to its District Meeting as delegate twice, and once to Conference. His family are all closely identified with Primitive Methodism, and among the most loyal workers in our Church here. Mr Lloyd has been twice elected to the Town Council. From very lowly parentage, and a godless youth, he has risen to considerable social position, and weighty character.

He was a very liberal donor to the handsome new church erected some eight years ago, and he is justly proud of this historic Circuit and of the prominent place his own Church has in the religious and civic life of the town.

I have not been able to unambiguously identify Councillor Lloyd in the census returns. The most likely candidate is Samuel Lloyd (1840-1921) – a cabinet maker born at Osbaston, Shropshire. Can anyone help?