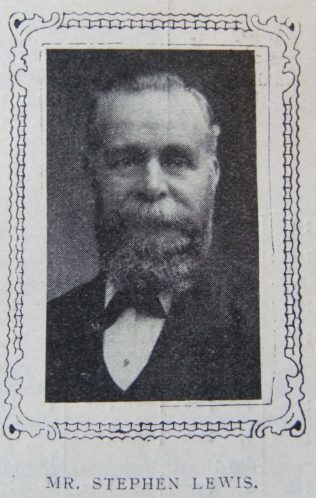 The Rev. Charles Garrett once said, “The future of Class meetings lies in the hands of the Class leaders.” If that be so, how necessary that we should have men of the right type for such important service. The brother whose picture appears with this short sketch is of that stamp. His gifts are not so showy as they are serviceable. He is sane and sober, without being sombre; patient and persistent, but not pushful; not doing things with a rush and then subsiding till the coming of the next sensation. No, he is constant as a well regulated clock. His absence from any meeting would occasion remark. If not there, people wonder if something has happened. Nor is he wedded to what is. Suggest an improvement, and he is not slow to adopt it, if it commend itself. He meets the younger members of his Class as a Christian Endeavour Society, and is as young as any, while with the elders, who prefer the old style, he is equally at home. No wonder he enjoys the confidence and affection of his well nigh fifty members, or that the Class forms so sound and reliable a part of the church. If anything is needed to be done they are the ones to do it. Mr. Lewis is proud of his Class, and they are no less proud of him.

To have lived the whole of his life, which is now not a short one, amongst the same people, and to-day to stand higher in their esteem than ever, is no small testimony to his worth of character. Our prayer is, may he long be spared, and may the Great Head of the Church continue to us a succession of Class leaders such as he. In addition to the above Mr. Lewis is Circuit steward, Sunday school superintendent, choir-master, and has just been appointed Secretary to the Dover Free Church Council. Truly a busy man and happy withal.

Stephen was born abt 1857 at Dover, Kent, to parents George and Ann. George was a bricklayer.

The Primitive Methodist Leader reported in 1922 that Stephen had been made a J.P. for the Cinque Ports. It reports that he had been active in the community, serving on the Education Committee and Board of Guardians.