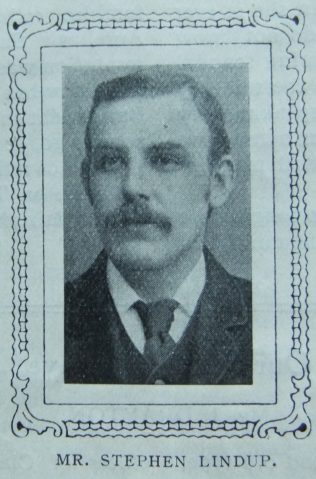 STEPHEN LINDUP incarnates many of the finest qualities of a Primitive Methodist official, and is beloved by all who know him for his genuine piety and his unflagging devotion to his church.

He was born at Flamborough Head, and was later taken by his father to our Flamborough Chapel. When he was seven years old the family removed to Killingholme in Lincolnshire. At fifteen he went to reside in Hull, where he attended the Established Church, and was confirmed by the Archbishop of York. At eighteen years of age – at Jubilee Chapel, in a week-night mission service, conducted by Rev. Henry Woodcock – he was converted to God, a fact of infinitely deeper significance than his confirmation by the Archbishop.

From that day to this his path has been that of the just. He joined the class of a famous leader in Hull, W. Sissons, who stuck to the rule of one hours meeting. He always began punctually, and though sometimes forty members were present, the meeting always closed at the end of the hour.

In 1886, Stephen Lindup came to Grimsby, and at once joined our Flottergate Church. He soon found a sphere of labour in the Sunday school, and for some years now has been one of its secretaries. It was no surprise to his brethren when he was proposed for the office of Society steward. This is no sinecure to the man who takes his duties seriously, for Flottergate Church sends £62 10s. each quarter to the Circuit Fund. Our brother thinks and plans for his church. He is a, generous giver, too. From the time of his marriage, his devoted wife and he have united to give one-tenth of their income to God’s cause.

Stephen was born in 1862 at Flamborough Head, Yorkshire, to parents Thomas and Sarah. Thomas worked in the Coastguard Service, with the rank of chief boatswain at the time of the 1861 census.

Stephen trained as a joiner. The 1901 census identifies that he also worked as an undertaker. The 1911 census describes him as a builder and contractor.