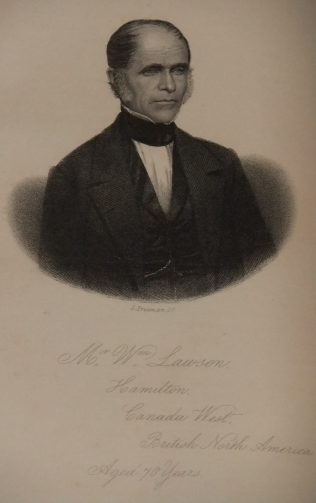 William was born on 27 November 1793 at Wallhome, near Brampton, Cumberland, second son of William Lawson, a tailor, and Frances Bell. After a rudimentary education William entered his father’s trade, but suffered financial losses and in 1829 emigrated to Canada with his family. He opened a shop in York (Toronto) as a tailor, draper, and hat-maker, and was joined by his former apprentice, Robert Walker, who bought the business in 1834. Lawson moved to Brampton, Upper Canada, then returned to Toronto, and finally settled in Hamilton in 1847.

Expulsion from the Wesleyans

William’s family belonged to the Church of England, but in 1813 he joined the Methodists and began preaching around Brampton. Although lacking formal training he was obviously a gifted preacher, arousing great feeling. In 1822, the Primitive Methodist movement spread and reached Brampton, in Cumberland. Here was living at the time William Lawson, a local preacher, class-leader and steward of the Wesleyan Society in the place. A friend of William, James Johnson, of Carlisle, a Primitive Methodist, had written him a letter about the work this infant denomination was doing, and also had enclosed a copy of the church polity, and offered to send a Primitive Methodist missionary to preach at Brampton if desired. This offer was accepted, but as the preacher that was to take the appointment could not fill it, Mr Johnson went himself. He was accompanied to the service held in the open-air by William. At this service, which was marked by much spiritual power, several professed conversion. For attending this meeting, William was, the following Tuesday, expelled from the Wesleyan Society. This action of the Superintendent Minister was not sustained at the preachers’ meeting held the following day and a deputation waited on William to request his re-acceptance of the official books he had surrendered; but he declined to accede to the request, and connected himself with the Primitive Methodist Connexion.

The year 1825 was one of much suffering in England on account of the failure of the crops, and William found the year following one of much anxiety in his business. Consequently he decided in 1827 to emigrate. One of the preachers of the infant PM Church, the Rev. John J Flesher, in passing through Brampton, stayed a night with William and was informed of the purpose of his host. John endeavoured to dissuade him, but after retiring he laid the matter before God in prayer, when his mind was changed, and he saw in a vision the safe arrival and peaceful settlement of his friend and family in Canada. When the itinerant related this to William and his household, it was a great help and comfort to them; and when he promised to endeavour to get a missionary sent if there were an opening, the light on their pathway seemed to get still clearer.

On 14 April 1829, William with his wife and six young children sailed from Maryport for Quebec. There were on board about a hundred passengers, to whom William preached every Sabbath, when possible. They landed on 29 May, and continuing their journey, reached Little York, now Toronto, on 11 June . William’s zeal was not injured by his new surroundings, and in July he commenced preaching in the open air in the market square of the town in which his lot had been providentially cast. One cannot help admiring such devotedness, and in such conduct we are reminded of apostolic history, in which we read, “They that were scattered abroad went everywhere preaching the Word.” The open-air services were continued till the following October, when a small school-house on Duke Street was secured for the services. This was the first building in which Primitive Methodist services were held in Canada. But it was found too small for the increasing congregation, and the school-house of Mr. Thompson, who had belonged to the Primitive Methodist Society at Duffield, Yorkshire, was obtained for the services. But while preaching and labouring to get sinners converted, steps were wisely taken to conserve the fruits secured, and a class-meeting was commenced in William’s house.

Besides his preaching, Lawson served his church as missionary secretary for many years, and in 1853 attended its English conference as the special delegate from Canada. He holds a pre-eminent place in the history of Canadian Primitive Methodism.

J Petty, The History of the Primitive Methodist Connexion, 1880, p311