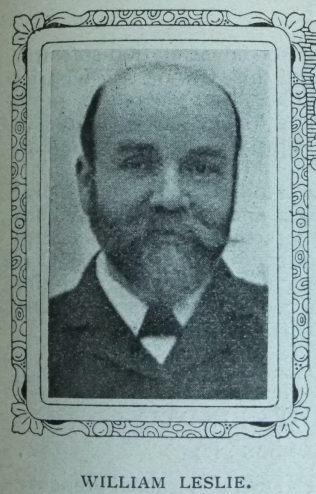 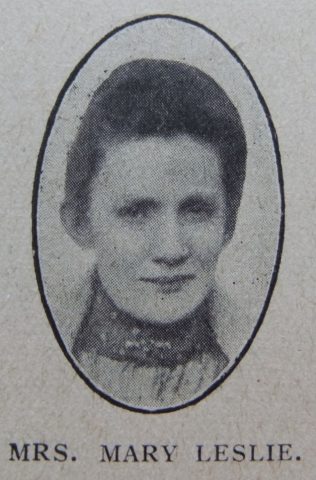 Mr. Wm. Leslie was born at Johnstone, near Paisley, 1862, and as a poet has achieved considerable local fame. Converted at the age of 14, his conspicuous gifts have been consecrated to the service of the Church, and a number of his hymns and tunes have been widely circulated, some being incorporated in such hymnals as “Songs of Victory.” Entrance into the ministry being blocked by a qualified medical certificate, our friend entered the field of evangelism, doing yeoman service not only for the Primitive Methodism but throughout the Highlands, where our Church does not exist. All denominations, as well as the un-denominational Faith Mission, eagerly seek his aid, and probably few men are better known and beloved in rural Scotland. Notwithstanding this, he is ever loyal to the claims of his own Church, and allows no outside work to interfere with his full share of duties therein. A member of District Committee, often delegate to District Meeting, and in 1906 to Conference, it is his joy to advance the interests of Primitive Methodism.

The “New Theology” has no charms for our brother, who with pathos and tenderness, yet withal definiteness, preaches the old Gospel with especial emphasis on “Holiness unto the Lord.” Locally he is a stalwart for the uplifting of the people and an ardent Liberal. The strength of his convictions, and his loyalty thereto are evidenced by the fact that he did not shirk a seven days’ imprisonment some three years ago rather than submit to the compulsory vaccination laws which still operate in Scotland.

May he be long spared to sing sweet Zion songs and inspire the people to duty and diligence.

William was born in 1862 at Johnstone, nr Paisley, Renfrewshire, to parents William Leslie and Agnes McMillon. He was baptised on 27 May 1862 at Abbey, Paisley, Renfrew. William, senior, was a smith.

Note: Some Family Trees on Ancestry.com report that William was married to Henrietta Gilpin (1863-1890) and then to Mary McArthur.