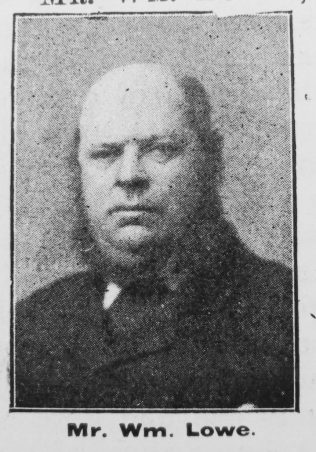 Transcription of Obituary in the Primitive Methodist Magazine by J.A. Taylor

Our friend was Sunday, and died August 30th, 1902, aged 74 years. One great advantage of his early life was, he had a pious mother, and not only was she pious, but a consistent member of Hill Top Chapel, Burslem.

This good mother died when our friend was 14 years old, but her influence and example came up again in the consistent Christly life of her son. After his mother’s death the family removed to Tunstall, and he joined the Primitive Methodist Church, became a devoted worker in the Sunday school, and in many ways helped on the good work. He had a very full life; one service a week did not satisfy him. He had an intense love for the house of prayer, and showed it in a whole-hearted devotion. As teacher, school visitor, librarian, tract distributor, there was a steadfastness about him which never wearied. Among his companions and fellow-workers at this time were such men as Thomas Goodwin, J. Nixon, Thos. Howell, J. Lovekin, John Simmill, Dan. Morris. John Cope, Wm. Spendlove, and others. Most of these worthy men have passed within the veil, but they have left hallowed influences behind. Circumstances called our brother from Tunstall to reside at Washerwall, and here he was the main stay of the cause for some years, frequently having to take the place of the preacher. At this period of his life he seemed capable of any service. He was trustee, Sunday school superintendent, class leader, preacher, and he never felt he was doing too much. “My meat and drink,” he could say, “is to do the will of Him that sent me.” From Washerwall our friend removed to Chell Heath, and joined the cause at Oxford, which has since grown into the flourishing society at Fegg Hayes. For some time he also gave attention and support at Pitts Hill, and had the joy of seeing many people added to the church. It was in the year 1865 that Brother Lowe and his family came to reside at Northwood. At first he joined a class held in the house of Sarah Lewis, Well Street, under the leadership of Mr. Reuben Ede. This class was part of our Marsh Street Society. For a long time it had been felt that a place of worship was much needed at Northwood, but the undertaking was far from a light or easy matter. But realising that something must be done, Brother Lowe, along with the late Brothers Leese, Chadwick, Forrester, Rathbone, Morgan, Clarke, and a few others took upon themselves the erection of the chapel, with which he was connected to the day of his death. The Sunday before his end came, he attended to his duty as teacher of the young men’s class. All that medical skill and tender attention could do was done, but the tired traveller was nearing the eternal city. “Raise me a little,” he said, and soon after he peacefully passed away, to see the King whom he had served for nearly 60 years. He several times represented his circuit at District Meetings and delegate to Conference, was a class leader 40 years, Sunday school superintendent 24 years, circuit steward 20 years, local preacher some 35 years. As teacher, leader, temperance advocate, trustee, preacher, he did his utmost for the cause and the people in this neighbourhood. Several times he said to me “I don’t understand why I am laid aside, I was looking forward to a few useful years among the people of Northwood, but God seems to will otherwise, and He knows what is best.” We saw him frequently during the last two or three years; at times his sufferings were intense, but he bore them bravely, and often expressed his gratitude for any kindness shown him. If he desired to live it was to be of some service to the church here which always lay very near his heart. At present we do not know how much we have lost by his translation to Heaven. Of this we are certain, this neighbourhood has lost a most godly earnest man, and the church a devout, faithful, generous servant. For 50 years our brother and his good wife have found a home for the preachers. Come when they would there was room and a welcome. We shall miss him very much. The home will never be the same again, there will always be a vacant chair. In our church courts we shall miss his practical knowledge and cautious advice.

The children in the school, and the children in the streets, will miss Mr. Lowe. Sometimes they thought he was sharp, but could they have seen his heart, they would have discovered there was no truer friend, none more anxious for their welfare than our brother. His long and useful life says to each of us, “Work while it is day.” Don’t wait for opportunities to turn up, go and turn them up. The final call will soon be heard, “Behold, I come quickly,” may we be able to say, “Even so, come, Lord Jesus.” God grant that Sister Lowe and her family, and all of us may triumph at last as he has done, whose departure we mourn and shall mourn for many a day to come.

Records identify that William was born in 1828, not 1825 as stated in the obituary. He was baptised on 7 September 1828 at Burslem. William’s parents were Samuel, a potter, and Mary.

For most of his working life, William worked as a potter. The 1901 census describes him as a grocer and general dealer.