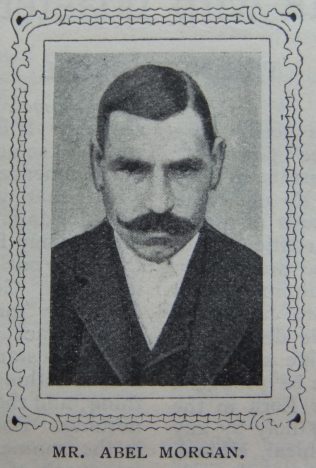 With regard to the Society Steward’s duties; our Consolidated Minutes direct that “he must supply written notices of services to be held, and collections to be made, take charge income belonging to the quarterly meeting, make provision for the Lord’s supper, and attend to the general interests of the Church.” As to his character and reputation, Paul directs that he must have his tongue, his palate, his appetites and his conscience under Christian control. His personal character and social relationships must be blameless. The home of which he is the head must be a Christian home. 1 Tim. iii. 8-13.

Weighed in these balances of the sanctuary, Brother Morgan is not found wanting. Mr. Abel Morgan had the happiness to get converted in his teens, and although a trained, trusted, and steady official of the Circuit, is yet under 40 years of age.

He is most attentive to all the duties of his office; deeming nothing too small for personal execution or supervision. Hence all pulpit notices are carefully written out before the time, and all monies promptly forwarded to their destination. His society’s share of the Circuit plans is diligently distributed and punctually paid for.

He takes a keen interest in the circulation of the monthly magazines, and deems it a pleasure to supply them to subscribers from month to month the year round. Transparency and trustworthiness characterise all the details of his money transactions for his church, and he takes care that all her claims are promptly met.

But to avoid mistakes, our brother frankly confers with his fellow-workers, and does not deem it too much trouble to go two or three miles to confer with and take counsel from his superintendent-minister. And it is his joy to see his little church steadily grow from more to more. One of the greatest joys of our brother is that his children are following in his steps and working for the Church of his choice.

The subject of this sketch was probably Abel Morgan of Great Wyrley, Staffordshire.

He was born in 1870 at Boney Hay, Staffordshire and worked as a coal miner at Great Wyrley.