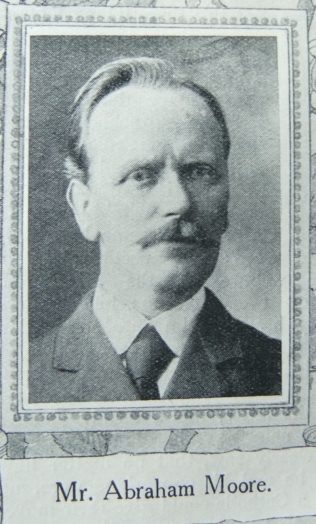 Mr. Abraham Moore, Chancellor of the Scarborough First Station, though born in Filey in 1862, was early in life brought into connection with Sepulchre Street Church, in which he now holds an honoured place. Of the forty-eight years of his life he has joyfully given thirty-two to Jesus Christ and Primitive Methodism. In Sunday School, Open-air Mission Work, as a Local preacher and Trust Secretary he has ardently and faithfully toiled. At the same time he has built up by unremitting toil and diligence a flourishing business. His probity and capacity received striking recognition a short time ago, when during a sever illness which prevented him from doing anything to promote his own candidature, he was elected upon the Town Council by the efforts of friends and neighbours. With Mr. Moore business and public life are part of the service he offers to Christ.

Abraham was born in 1862 at Filey, Yorkshire, to parents Charles and Ann. Charles was a bricklayer.

Abraham began work as a bricklayer and built his own business as a builder and contractor.

Abraham died on 29 May 1937 at Scarborough, Yorkshire.