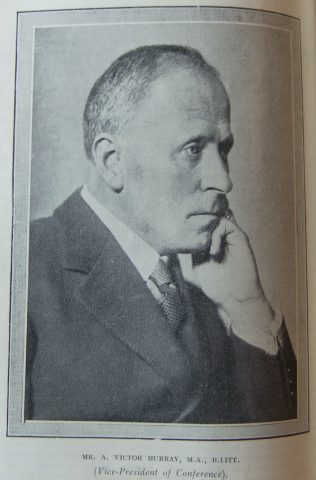 Victor was born in 1890 at Choppington, Northumberland, to parents John and Elizabeth. John was a grocer.

As a boy Victor attended Morpeth Grammar School, and from there won an exhibition to Magdalen College, Oxford. At Oxford, he read history and theology.

For a time Victor was a travelling secretary of the Student Christian Movement. On leaving the S.C.M. he was appointed a lecturer in education at the Selly Oak Colleges. In 1927, a travelling scholarship gave him the opportunity to spend a year in Africa studying native education.  Some of the results of that year were recorded in his book – The School in the Bush. Victor was later conferred with the Oxford L.L.B for a thesis on ‘Abelard’. He achieved the rank of professor.

Abelard and St. Bernard: a study in twelfth century modernism.

The school in the bush: a critical study of the theory and practice of native education in Africa, 1929

The cause and the individual, 1933

Personal experience and the historic faith: an essay, 1939

The school and the church: the theory & practice of Christian education under the Butler Act, 1944

Security of church and state: being the Vice-Presidential address at the Methodist Conference, Newcastle, 1947

How to know your bible: a guide to biblical study, 1952

The state and the church in a free society, 1958

A Northumbian Methodist childhood: an autobiographical account of family, community and chapel life in Choppington and Berwick-upon-Tweed around the turn of the 19th century, published 1992